Dyvers Part 1: The City You Don't Remember, Remembers You Still. 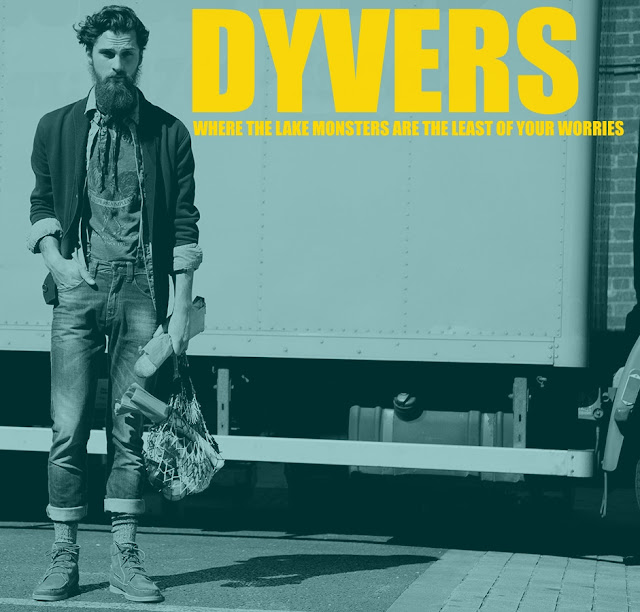 When you think about the Free City of Dyvers what do you imagine? Is it a large city? Does it nestle against a river? Or does it sit against the mighty Nyr Dyv, the lake of unfathomable depths, and keep a watchful eye on its rival, Greyhawk?

For a lot of us I don't think there's a clear answer to any of these questions because Dyvers isn't a sexy location. There are no Temples of Elemental Evil cropping up on its boarders; no castles built on long forgotten necropolises filled with ravenous monsters. I can't even think of adventures where it's featured. Let's face facts, kids: Dyvers is the city people throw in their campaigns when their players can't make it to Greyhawk.

For me that means that I need to remake my beloved city in a way that makes it special. That means that I need to create a city that my players will want to not only explore but come back to repeatedly and always find something new to discover and explore. Before I go changing everything I need to firmly establish what Dyvers is as it exists in the game world today.  The best way to do that is to look at how it's described in the Living Greyhawk Gazetteer

The city of Dyvers is located in perhaps the most lucrative trading nexus in all the Flanaess, a fact that has benefited it greatly throughout its long history. The city's position on the southern banks of the the mouth of the Velverdyva River allows Dyvers to capture the flow of trade from markets such as Schwartzenbruin, Highfolk Town, Tornward, and Verbobonc. Of course, trade flows up the Velverdyva, as well, so Dyvers sees much traffic from the Nyr Dyv and her various port cities. Accordingly, Dyvers is a reflection of many cultures - even the common barkeep can make change in a dozen different coinage systems.

The Free Lands of Dyvers consists of approximately 2,000 square miles on the southern bank of the Velverdyva, including four river islands, the verges of the Gnarley Forest, and the northernmost tip of the wooded Kron Hills. The land nearest the free city is suitable for farming and is leased to freemen by the Gentry of Dyvers, a collection of noble families who proudly trace their lineage back to the city's Aerdi founders. The wild lands beyond the farms are technically owned by the less influential members of the Gentry, but are in fact populated primarily by lawless woodsmen, sylvan elves, and no few fairies, who of course pay tribute to no human lord.

A number of small villages dot the Free Lands of Dyvers. The most notable is Maraven, a burgeoning eastern town near the border with the lands of Greyhawk. Maraven straddles the highly traveled Greyhawk Road, and in the past played the Gentry of Dyvers against the Directing Oligarchy of Greyhawk, managing to remain neutral even through periods of heavy skirmishing between the cities. In recent years, however, the Magister of Dyvers, Larissa Hunter, put an end to this intrigue, by stationing a castle to the east of Maraven, solidifying a hold on eastern nobles whose support was once tenuous at best.

Dyvers enjoys temperate weather throughout much of the year, with some accumulation of ice on the Velverdyva in deep winter. Due to its immense size and perhaps magical properties, the Lake of Unknown Depths does not freeze in cold weather; Dyvers runs shipping operations year round. Crews are mindful of the monstrous predators of the lake, however, and prepare accordingly.

The elite of Dyvers' small military forces are the Free Marines, 1,500 well equipped and trained mariners who double as passable cavalry and infantry in times of crisis. Most troops are in the Free Army, roughly three thousand humans carrying either polearms or shortspears and shields. The current magister achieved great success in the wars as the captain of this able force . . . (Holian, 40 - 41)

The description is pretty bare all said (though it should be noted that the history of the free city provides some interesting details to the city). We don't have any landmarks of note and unless you're looking for a place to trade there isn't a lot to get excited about there. But there are features here that we can use to make the city more impressive: the location of the city on the Velverdyva and not directly on the Nyr Dyv; the lake monsters in the Nyr Dyv; bandits on the outskirts of the territory; and a conflict with Greyhawk.

The situation with Greyhawk is really only mentioned above in relation to actual armed conflict in the past, but there is no reason to suppose that the two cities have only fought with arms. As any World of Greyhawk enthusiast knows the Free City of Greyhawk has meddled in the affairs of other nations through economic and diplomatic manipulation. It would only be natural that Dyvers, being the rival city to Greyhawk, would attempt to do the same. In order to do that it would need not only the economic power of its trade but it would need the cultural capital to influence others. How do you imagine that Dyvers would attempt to bring that to bear?

I find myself thinking about Paris here and how it managed to influence the world even after the French Empire stopped being the economic and military center. It did it by having the best education through its universities; by having the most influential philosophers, scientists, artists, authors, and inventors living there; by becoming the cultural melting pot where new ideas and social mores are being born; and by creating architectural marvels that still take your breath away today. Thinking about the cities that have risen, and are in their ascendance, since Paris was the cultural center of the world it becomes clear that these avenues of cultural power are the way that Dyvers would attempt to become a counter-point to Greyhawk.

We know that Dyvers has the money, remember it ". . . is located in perhaps the most lucrative trading nexus . . ." (Holian, 40) in the world. We know that there is a rivalry with Greyhawk and that without a war going on the nobility of a nation will spend their money attempting to prove how much more wealthy, powerful, and important they are than their rivals. That means that the nobility of Dyvers will attempt to out shine that of Greyhawk by becoming patrons of art, invention, science, and so on. They will actively court the brightest and best of the world to their city so that best, new wonders of the modern world will only be found there.

That sort of thinking about Dyvers changes how the city should be thought about. Instead of asking the name of the next inn we should be talking about the next marvel being unveiled. Dyvers should feel like a thriving metropolis that has new wonders of every sort appearing seemingly every day. For me Dyvers is a city ascending. It is a place with a chip on its shoulder looking to prove its importance, not only to the surrounding nations that press against its border, but to Greyhawk. Dyvers is London to Greyhawk's Paris. It may never become the dominant cultural power in the world but it will be a threat on every level to Greyhawk in that regard.

In order to push this on the right foot we need to make Dyvers important from the first minute that your players lay their figurative eyes on it. It needs to feel like something special not just another large city sitting on the edge of a river. There are lots of options for this but the one that I like the best was created by Robert Silverberg in his novel, Lord Valentine's Castle

, and the description of the city Stoien.

". . .Valentine found Stoien strikingly beautiful. The entire peninsula was altogether flat, hardly twenty feet above sea leave at its heights point, but hte city-dwellers had devised a wondrous arrangement of platforms of brick faced with white stone to provide the illusion of hills. No two of these platforms were of identical height, some providing an elevation of no more than a dozen feet, others looming hundreds of feet in the air. Whole neighborhoods rose atop giant pedestals several dozen feet high and more than a square mile in area; certain significant buildings had platforms of their own, standing as if on stilts above their surroundings; alternations of high platforms and low ones created eye-jiggling vistas of startling contour.

What might have been an effect of sheerly mechanical whimsy, rapidly coming to seem brutal or arbitrary or fatiguing to behold, was softened and mellowed by tropical plantings unrivaled in Valentine's experience. At the base of every platform grew dense beds of broad-crowned trees, interlaced branch by branch to form impenetrable cloaks. Leafy vines cascaded over the platform walls. The wide ramps that led from street level to the higher platforms were bordered by generous concrete tubs housing clusters of bushes whose narrow tapered leaves were marked with astonishing splashes of color . . ." (Silverberg, 306).

Reading that passage I found myself imagining a Dyvers that followed a similar path. The idea has kind of been bouncing about in my mind for weeks as I have been thinking about rebuilding Dyvers as something far more exciting than just the next shop and inn. Yesterday I even put down a hastily drawn sketch during my break. 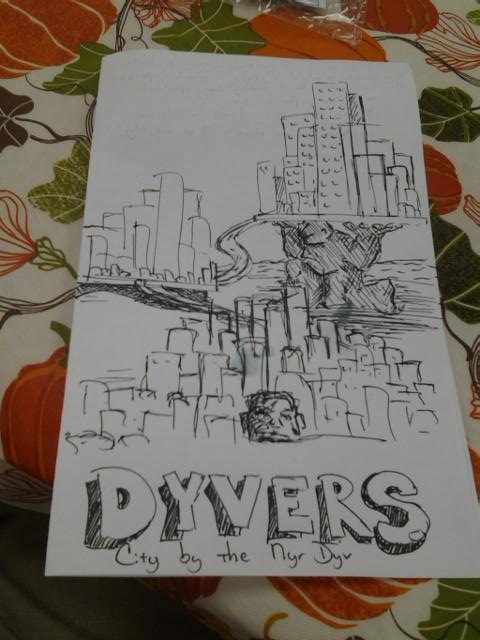 I like the idea that you could have a city suspended on stilts and platforms but the idea that these mountainous, statues would be supporting the city really made me excited. It set Dyvers apart from the minute that you first looked at it and immediately gave it something special that your players would remember for years after. There would have to be more than just these statues though or else they too would fade from memory and become just a footnote in the game; nothing more than a mote that gets in your eye and then is gone.

What made Stoien so memorable for me was that there was this over-arching theme to the platforms and the city. The gardens make the whole place something special and give it's people a character that would otherwise be lacking. I want to borrow what Silverberg so brilliantly achieved and make Dyvers have that same sort of impact for my players.  Right now that means that I'm borrowing his platforms since there's a logical reason to use them with Dyvers - the flooding Nyr Dyv and Velverdyva river - but if I keep them than there has to be some theme to the city that makes it more than just a situation where they've seen it once and they're done ever hearing about them again.

Perhaps the best idea is to change the statues under the platforms into lake monsters and use that as the theme of the city. Imagining statues of them throughout the city with live, smaller varieties of the Nyr Dyv's monstrous denizens kept in aquariums on every wealthy lot and in practically every well-to-do business seems like a good way to go. It's a bravado that echoes that described later on in the city of Stoien and creates a sense that the people of Dyvers have this fearless attitude about their surroundings; as though they realize that they are surrounded by forces of nature that could easily destroy them tomorrow and instead of cowering before their fates they have decided to embrace them.

Buy the Books Discussed in this Article