So over on AWE me they decided to build what they're calling "The Ultimate D&D Gaming Table." Watch the video below and then we'll talk some more

Okay. So I wasn't very impressed with the table. I mean the 50" TV and tablets are really nice but the there are just a lot of little things that I don't like. Here's the run-down. 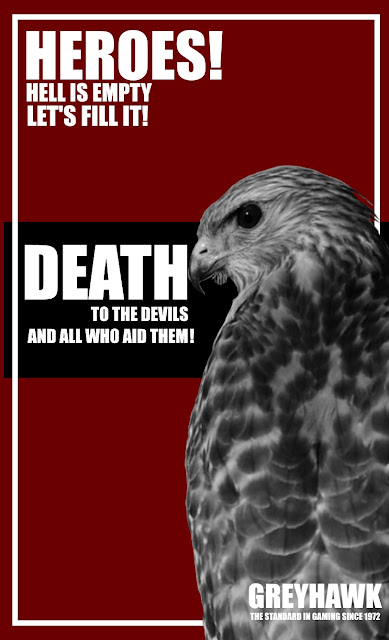 It's A False Argument but Batman Running Through the Streets Should Make Up for It.

Last night I was catching up on some of the Black Gate archives I've missed when I ran across an article by Bob Byrne, Why I Went Old School - or Swords & Wizardry vs Pathfinder, that kind of got my attention. In the article Byrne discusses the reasons why he went with Swords & Wizardry over Pathfinder by trotting out many of the same arguments that you'll see time, and time again, whenever the discussion gets brought up online. But the one that got my attention was this one:

". . . I used this when explaining S&W to one of my new players. Now, in Baldur’s Gate, he would click on the ‘Find Traps’ skill and if a trap was nearby, it would be outlined on screen in a red box if detected. And he is aware that in a modern game (like Pathfinder), you would roll a 20-sided dice against your Find Trap skill.

But I explained it won’t work that way in S&W. After I described the environment, he would have to tell me how he goes about looking for traps. Does he examine the ceiling? Does he roll a round stone across the floor? Does he put his fingers in the mouth of the idol (always a dangerous move!)?

To try and bluff your way past the guard at the city gate, you don’t simply roll against your Bluff skill. You have to tell the same story to the Referee that your character is telling to the guard. With appropriate gestures . . .

The Referee may simply determine whether it worked or not. Or if the try was plausible, they may roll a dice against the character’s Charisma score, with a bonus or penalty, depending on how good the story was. So, even though there is a version of a skill check involved, it’s driven by the player action, not the character sheet . . ." (Byrne)

Since I first became aware of the Old School movement I have always been bothered by the argument that rule heavy systems, like Dungeons & Dragons 3e and its kin, force the players to play the game through their die rolls and character sheets rather than to take control of the action through the use of their own creativity and narrative choices. At its core this argument is one that would have you believe that providing players who might not be as creative with a way to accomplish their goals and to participate in the game in a meaningful way, such as through the use of skill checks, eliminates the possibility for them to play in any other way - which is bullshit.

Players did not suddenly cede their right to make a meaningful narrative choice, or use their creativity to deal with a problem in the game, simply because they elected to play a game that provided them with a skill check to accomplish the task without having to detail every action they might make in the attempt. Things like skill checks were not designed to eliminate the player's ability to think outside the box but rather to allow them the opportunity to accomplish actions which they might not have the natural skill or knowledge to otherwise attempt. They are an aide to play; not a hindrance binding play behind a massive block of rules.

Now back to my book.

I've been looking over the way that I tag my blog now, as compared to when I started, and I have to say that I wish I had been more thorough when I first started. Like now when I begin posting an article my goal is to make it easily index-able for myself so that I can find the things that I've talked about in the past without having to wonder if I'm treading over the same ground that I've passed before. I mean, fuck, I've been writing this blog now for four years and in that time I've written over a thousand posts. And don't get me wrong; I've talked a lot of shit in those thousand posts, but it would be nice to know what I've said in the past without trying to remember what I said four years ago.

I'll fix that some day when I've got time and nothing else to do. #NeverBitch
at December 04, 2016 2 comments:

That Guardians of the Galaxy Vol.2 Trailer Though . . .

When the first Guardians of the Galaxy trailer released a few years ago I found myself stupidly excited for the movie. Here was an opportunity for me to finally see one of the great, weird comics that I grew up loving and that I always had trouble finding on a regular basis. I hoped that the movie would be a fun ride, and I wasn't disappointed.

Now the second trailer has released and I'm so damned excited that I can't wait for the movie to finally release!

How Should We Be Describing Areas in Role-Playing Games

Last night I was reading reddit when ran across a novice Game Master (GM) asking for help in describing their game world. This particular GM had been running an adventure with lots of boxed text descriptions of each room which they had faithfully read as their players had explored. With experience, however, this GM had begun wondering if this was right or if they should be a bit more imaginative with the descriptions. The answers to this question left me feeling rather unfulfilled so I thought that I would explore the question more fully here.

When I first began running Dungeons and Dragons twelve years ago I ran games that came exclusively from my own imagination. I didn't pick up an official adventure from TSR or Wizards of the Coast for two years; and by that point I had already established my own style of describing the worlds my players were exploring which was heavily influenced by the pulp authors that I frequently read. As a result the boxed text felt heavy and unwieldy so I wouldn't run a published adventure because I arrogantly felt like running one would be akin to putting the training wheels back on my bike.

It wasn't until I really started getting into the Greyhawk setting that my view on published adventures changed. I can remember reading The Lost Caverns of Tsojconth and it suddenly occurred to me that by ignoring the published adventures, and their ubiquitous boxed texts, that I was missing out on all of this really exciting stuff that other Dungeons and Dragons players had experienced. So I began to attempt running published modules.

The first module that I attempted to run as it was written was David Cook's Dwellers of the Forbidden City. It was a challenging adventure for my players but as a GM I found it just as challenging to keep it interesting for them when it came time to read the boxed text. The problem was solidly my fault as instead of using the text as a starting point from which I would build the description I stubbornly stuck to reading it as it was written.

That was a mistake.

One of my strengths as a GM has always been my ability to describe the locations that my players explore with a brevity that leaned heavy on mood and the big details. Without question my style is influenced by the Robert E. Howard novels I read and loved. A good example would be this passage from Son of the White Wolf:

". . . THE SUN WAS not long risen over the saw-edged mountains to the east, but already the heat was glazing the cloudless sky to the hue of white-hot steel. Along the dim road that split the immensity of the desert a single shape moved. The shape grew out of the heat-hazes of the south and resolved itself into a man on a camel . . ." (Howard)

In that short extract everything about the location is told in three sentences and as a GM, and storyteller, I'm always looking to emulate his style. I love the quickness of it and how a mood for the reader is so easily established.

After my failure with Dwellers of the Forbidden City I decided to take a different approach with all future published modules I would run and try to bring a bit of Howard's style into the descriptions. Now I could do it on the fly but often it meant that I would end up missing things. The tone might get slightly off because I hadn't read far enough to know the location wasn't all that important or that the current non-player character (NPC) would be a pivotal character in the adventure. So I found myself doing a lot of prep work in order to make the published adventures work in a way that satisfied me.

I would begin by making a copy of the adventure that I could write notes in without feeling guilty. I would then read the entire adventure before I began making notes I would need. I had to know what was happening; who the villains, throwaway characters, and heroes were. Then I would go back through a second time and make my notes. I would jot down a few quick thoughts on how I wanted this NPC to sound or the mood that this location needed to give the players. I highlighted things that I wanted them to discover and that I wanted to find quickly (like the villains' characteristics, weapons, and spells). And the night before I would read out loud the parts I thought we would touch in the session to my wife (when she wasn't playing), attempting to use all of my notes, to see what was working and failing.

All of that prep work I do has often paid off in ways that have taken my running of the adventures from cumbersome affairs into things that my players still talk about today - but it also made me incredibly hesitant to run the larger adventures. As you can imagine, published adventures end up being a lot more work for me and when I look at an adventure that's 250 pages long or more I have a hard time justifying spending that much time on it when my only reward may be my players looking at the start and saying, "Well, this is fucked. We're going the other direction away from the dragon and towards the bar." But Greyhawk has a way of rewarding my efforts. I consistently find myself enjoying the villains that I discover in these modules more than I did previously when I only knew their names and had read through their wiki descriptions. The locations I prepare for never go to waste as I can always find the time to let my players discover a crashed space ship or a hidden shrine to some foul demon princes looking to destroy the multiverse.