O' Greyhawk, Where Art Thou?

The other day Christopher Perkins, Principle Story Designer for Dungeons and Dragons at Wizards of the Coast, put out a poll that went like this:

Out of the 2,829 votes Greyhawk got 538. Every other setting presented as an option by Perkins beat us by an average of 200 votes. That's just embarrassing.

I mean I get it; I really do. Dark Sun had a pretty popular relaunch during Fourth Edition (those Dark Sun books are actually really cool and you should totally check it out). Dragonlance still sells a ridiculous amount of novels and was really well supported throughout Third with an official Campaign Setting book and a bunch of third party releases from Margaret Weis and the Sovereign Press group. And of course Eberron was fully supported throughout Third and Fourth editions with supplements, adventures, novels, art, and articles on the website and the magazines.

By contrast Greyhawk hasn't had anything officially published by Wizards of the Coast since 2007's Expedition to the Ruins of Greyhawk. Largely we've been absent from the conversation and we've seen Cannonfire, arguably the largest community of Greyhawk enthusiasts, steadily growing silent over the last few years. We're at a point as a group where we either need to become active in proselytizing the setting to other D&D enthusiasts or we need to recognize that the setting is going to become a footnote in the game's history. People will read about in Wikipedia as the place where Gary Gygax ran his games, and that will be all they'll know about it, and that's a damned shame.

The thing about it all is that we know Greyhawk shouldn't be left to such an undignified fate. As a setting it was home to many of the greatest adventures in the early days of the hobby. They're so good that even today we're seeing them shape what many people view as the standard of what a good adventure in our hobby looks like; which is great, but they're being moved out of Greyhawk and into the Realms as Wizards of the Coast uses them for inspiration and transplants them. They're creating a new standard of what good looks in modules like Princes of the Apocalypse

for a whole new generation of fans that may never even think to go out and pick up what inspired their favorites.

Greyhawk is a setting that I've found had enough room in it for my version of it, and for +Mike Bridges' version for it, and +Joseph Bloch's version for it, and for every other version you run into without the sort of cannon pissing contests that crop up every time you so much as mention the Forgotten Realms. The reason for that is that Greyhawk is so flexible as a setting: we have space ships, wars with demons and gods, artifacts so powerful that their names have been in every edition since they first appeared back in First Edition, all the named spells in every Player's Handbook came from characters that exist only in Greyhawk. Two of the most successful times in this hobby's history came about when Greyhawk was active: First and Third edition. In First, Greyhawk helped establish what was possible in the game and the adventures set there are still talked about today.  In Third, we saw the return of Greyhawk as it was the edition's setting; it was flexible, and by and large, loosely defined for this edition. In doing so it offered a level of freedom for new players that let them carve out their own Greyhawks and brought people like me into the community with this hunger for the setting.

Greyhawk is the setting that gives us the opportunity to do our own thing when we start out. We don't have a library of fiction that has established a narrative for our world that our Players feel we must hold tight to our bosoms. Our setting isn't filled to the brim with godlike non-player characters (NPCs) who shuffle our players' characters about the world like chess pieces; and quite frankly, the NPCs die far too easily in our setting for them to even hope to attain that level of Machiavellian power.

So how do we turn this about and bring Greyhawk back to the forefront? How do we get Wizards of the Coast to recognize what we see in this setting?

The simplest answer is that we have to get vocal about the setting. We have to tell the ladies and gentlemen of Wizards' D&D team that we want Greyhawk to come back with this edition of the game. We have to talk to them on Twitter and email the Wizards corporate office. But more than that we have to go to the places where people are talking about Dungeons and Dragons and role-playing games and engage them about the setting. We need to open Greyhawk up on reddit, and we need to encourage people to join it on Facebook. We need to be champions for Greyhawk, because if we aren't then no one else will be. 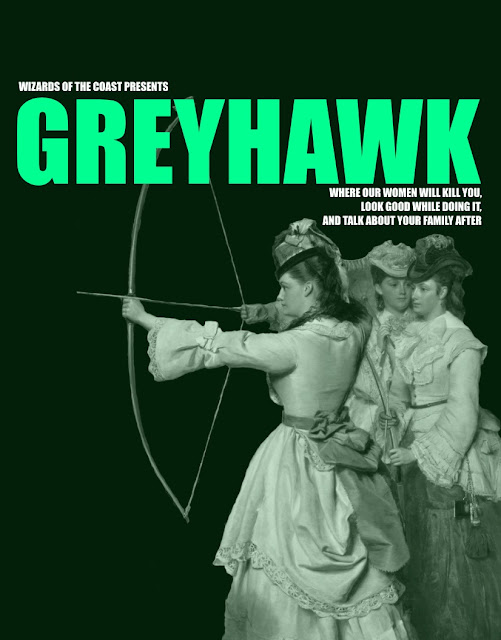