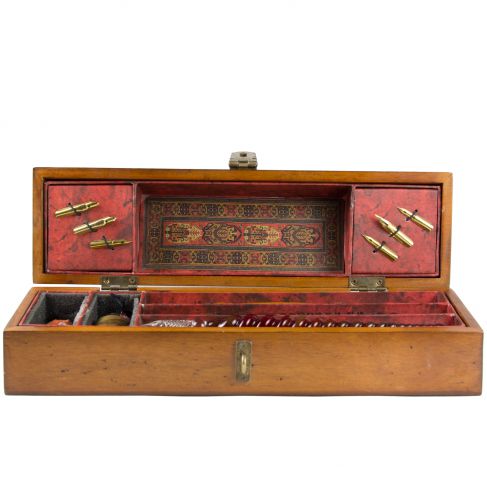 
A Calligraphy toolkit seems like an odd fit into the game since such a thing is intrinsically a superfluous thing. It isn't just used for a scribe as a quill and ink would be far easier to gather since the quill could be gathered freely during the molt (most commonly from a goose but crows, eagles, hawks, owls, and turkeys are also used) and then only the ink would have a cost.

It stands to reason then that the Calligrapher's toolkit is going to be as much a decorative as functional item. This kit is a representative of both the Calligrapher's skill and their accomplishments. So the box itself will be something special, lined with decorative fabrics, and hinged with wrought metal (perhaps silver?). The pens themselves will be beautifully carved and blown to present the Calligrapher with a utensil for their craft that speaks of the elegance of their craftsmanship.

To be a Calligrapher is to be in a luxury profession where the richest nobles call on your services and even the lowliest scribe rolls their eyes in your wake. For that reason I can only imagine such professionals to use a box as beautiful as the Windsor Prose Writing Set

(pictured above). It's a good benchmark for what the sets your Calligraphers use should look like and feel like.

Was it a Money Grab? Or Was There a Substantive Reason for the Relaunch?

A couple of days ago I ordered the Third Edition books - not the 3.5 books that I've always played with kids, but the actual, honest to God 3.0 books. When I first started playing Dungeons and Dragons the game had already switched over to 3.5 and the 3.0 books were long since gone from the store shelves. As a result I've never actually seen the edition as it was originally released.

Like so many things that I do on this blog the idea of actually researching the whole thing has a certain appeal to it that I have a hard time shaking. And they're so cheap right now that it was hard for me to not pick them up. Today I received the first of the core books: the Monster Manual. I'm kind of excited to see what changed between the two versions. And since no one but me actually has any interest in this edition here's some links so you can buy the books! (Sorry but the $1.47 Player's handbook doesn't have a cool link so you'll have to look it up on your own!) 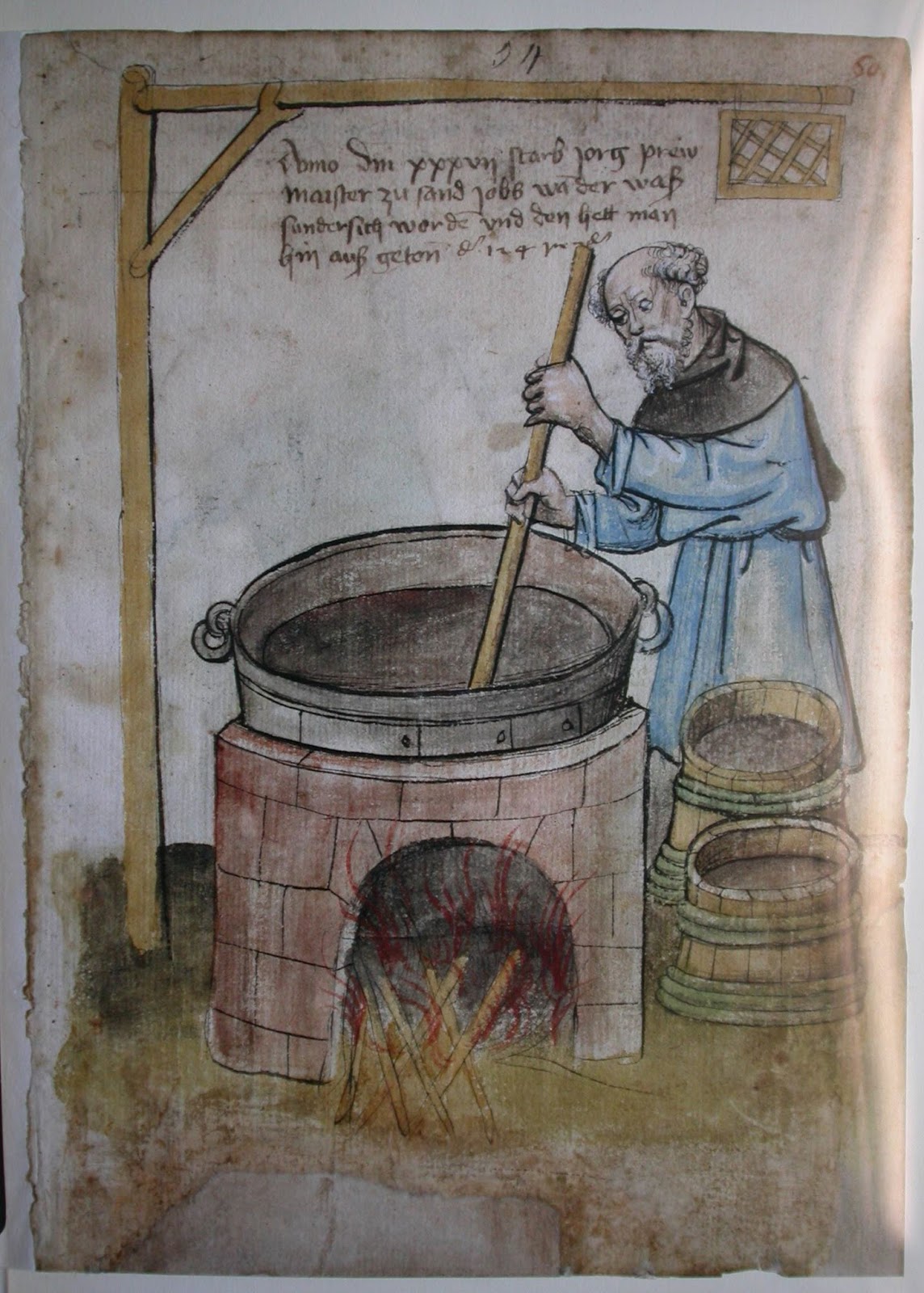 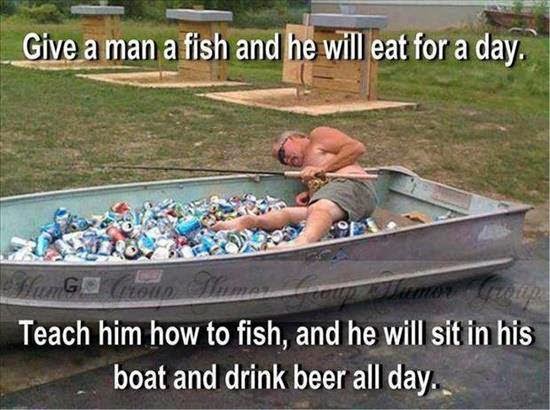 Alright, so apparently the problem with the blog came from me deleting my google+ picture albums that had my son's photos in them. Apparently the two were connected which means that when you delete one that they're completely removed from your fucking blog - because that makes perfect god damned sense. Serves me right for not assuming that Google would fuck that up and treat the deletion of a private album as the deletion of a public thing. Anyway, I'm in the process of correcting everything but it's going to be an incredibly long slog that will probably take the better part of the year before I'm able to actually get everything back the way that it was.

So Damned Much to Learn Before the First Step is Taken

I don't know if I've mentioned it on here before or not but I'm working on building a YouTube channel that will be mostly me playing and reviewing video games. Both aspects of the project are daunting as there's so much that I have to get ready before I begin actually putting content out on the net.

I mean it isn't like blogging. That makes sense, right?

I tried downloading the US Copyright primer that's been put out by the Feds but that thing is a massive beast that makes my head spin as I slowly work my way through page after page of self referencing legal jargon. I'm also going through YouTube's class things. Will it tell me everything I need to worry about? Of course not. But if it can keep me out of really hot water then I want to learn about it first.

Apparently something in Google+ has gone all kinds of wonky and I'm having to go through and repair it all. Fucking bullshit mass integration of the whole god damned network screwing up every god damned thing.

Links for me, and maybe for you. Who knows?


This is a list I’m using to update a bunch of links for GBRC 2015 from last years list since my bookmark tab got nuked when I had to get a new computer. Probably boring for people who’ve already seen the GBRC 2014.

2 Warps to Neptune:
A

About Bruce Heard and New Stories:

Anamnesis of the Mystic Scholar:

And the Sky is Full of Dust:
Angry DM, the:

Archive of the Rotted Moon:

B
Back to the Keep:
Barking Alien:

Bat in the Attic:

Beyond the Black Gate:

Big Ball of No Fun:

Blessings of the Dice Gods:

Cartography of Thorfinn Tait, the:

Clash of Shield on Spear, the:

Dandy in the Underworld:

Dice are a Lie, the:

DM from Outremer, the:

Don't Let It Kill You:

Dreams in the Lich House:

Echoes from the Geek Cave:

Esoteric Order of Role-Players, the:

Eye of Joyful Sitting Amongst Friends, the:
F

For a Few Coppers More:

From the Sorcerer's Skull:

Hall of the Mountain King:

Hamsterish Hoard of Dungeons and Dragons, a:

Hitting on a Double 1, Killed by a Double 1:
Howling Tower:
How to Start a Revolution in 21 Days or Less:
How to Succeed in RPGs or Die Trying:

I Waste the Buddha with My Crossbow:

In the Words of Tom:

Keep on the Gaming Lands, the:
.

Kill It With Fire!:

Lands of Ara, the:

Lamentations of a DM's Wife:


Lamentations of the Flame Princess:

Legacy of the Bieth:

Life Full of Adventure, a:

LOOK, ROBOT - the Stars are Coming Out:

Lost in Time:
Love in the Time of Chasmosaurs:

Nine and Thirty Kingdoms, the:

Observations of the Fox:
Ode to the Black Dougal:
Old School Wizardry:

Once More Unto the Breach!:
Original Edition Fantasy:
Orcs Among Us!:

Paladin in Citadel, a:
Papers and Pencils:

People Them with Monsters:

Playing at the World:

Ramblings of Jacob and Delos:


Return to the Keep, a:
Reviews from R'lyeh:
Richard's Dystopian Pokeverse:

Ruminations of a Geek:

Savage Afterworld, the:
Savage Swords of Athanor:
Save Vs. Dragon:
Save Vs. Poison:

Save vs. Total Party Kill:
Sea of Stars RPG Design JournalSecrets of the Shadowend:.

Sorcerer Under the Mountain:

Tales of the Grotesque and Dungeonesque:

Tales from the Flaming Faggot:

Tales from the Tower:

Tower of the Archmage:

Voices in my Head:

What a Horrible Night for a Curse:
Windsor Gaming Resource:

Word of Stelios, the:

Your Dungeon is Suck:
Z