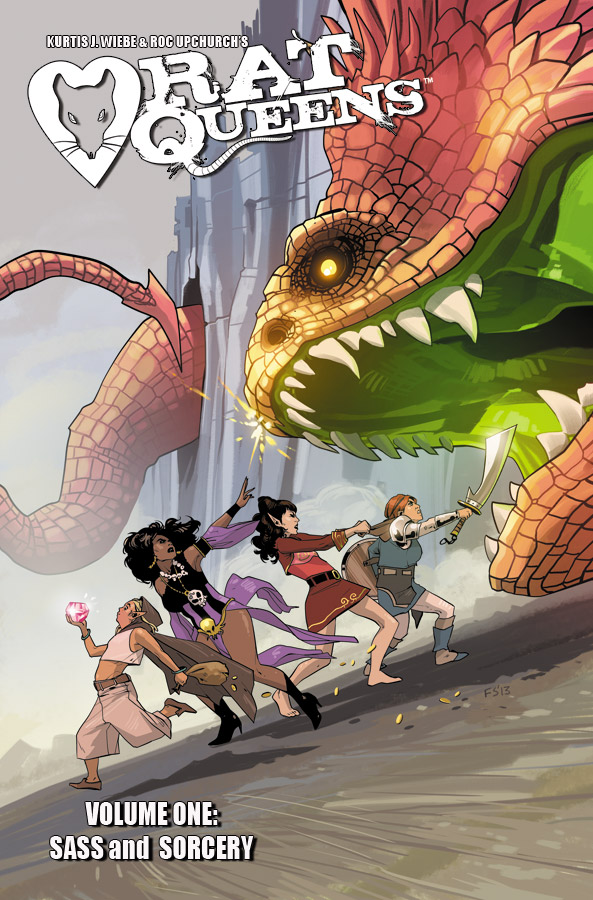 I picked up Rat Queens Volume 1

after it was recommended to me by +Martin Thomas. The premise of the series is essentially a group of all female Dungeons and Dragons-esque characters who bounce about their local town performing the stereotypical quests - that is until things drastically change. While the plot may seem a bit trite from afar the crisp writing from Kurtis J. Wiebe takes what could become another boring slog and creates a comic that turns the whole genre on its head. Gone are the plodding and sluggish tropes that have plagued the D&D and Pathfinder comics and in their place is a comic that feels like the people could actually exist in the real world. The characters act like people you've met at bars, drinking far too much and having all the carnal fun that comes along with that, and they speak with a dissatisfaction that feels more at home today than at any time in recent memory.

The art by Roc Upchurch is clean and has a crispness to it that harkens back to the best in the industry. It perfectly suits the story being presented and mirrors the tone expressed in the script perfectly. Though if you like the art as I do you should be aware that Roc will leave the comic in coming issues due to some deeply troubling personal situations that came to light.

I can think of no higher praise to give a comic than to say after years of dissatisfaction with the comic book industry as a whole Rat Queens has brought me back into the hobby and happily searching through the back issue boxes trying to catch up on everything I've missed. If you're looking for a great comic to read that will have you wrapped up in its story from practically the first page then this is the book for you.

You can pick up Rat Queens Volume 1: Sass and Sorcery from Amazon for $6.31.