When I was growing up we used to watch a lot of the "Singing Cowboys" that were popular back in the 1920s and 1930s. Unlike most modern movies the Singing Cowboy movies were simple affairs. The good guys fought the bad guys and along the way they always found a way to overcome those dastardly bastards of the imaginary West. Now days those movies are called "simple," "naive," affairs that gloss over the imperial expansion of America and its destruction of Native civilizations.

Some people just can't have any fun without being shit heads about what everyone else loves. Anyway, I'm off to watch an old Tex Ritter film, Hittin' the Trail, with my son so I thought that I'd leave you cats with a great little playlist in the singing cowboy spirit.

The Prelacy of Almor, Part 1: Where It All Begins

The campaign that I've been thinking about running for the last few months will be based in the Prelacy of Almor; a small state formerly situated between the Kingdom of Nyrond and the Great Kingdom of Ahlissa. Now if you're like me then it's likely that the only thing you knew about the Prelacy of Almor is that it was utterly destroyed by the Great Kingdom during Ivid the Undying's expansion and what wasn't conquered by him was absorbed by Nyrond. Or you could be like my lovely bride and just laugh every time I try to say Almor with my southern drawl bastardizing it into a terrible mess of false consonants and invented vowels. Regardless of where your knowledge about the Prelacy of Almor begins I'd like to discuss how I'm using the little state and where I'm envisioning the campaign going as it progresses.

Prior to the Greyhawk Wars the Prelacy of Almor really didn't have a lot of attention paid to it in the published materials for the setting. In truth the only real information that I could find on the state was found in the 1983 Boxed Set where it's description is fairly short and uninspiring:

. . . Originally a clerical fief of Aerdy, Almor grew in power and independence as the Great Kingdom became weak and decadent. The various petty nobles and the Lord Mayor of the town of Innspa swear allegiance to the reigning prelate - usually a high priest. The state is only loosely organized, but it has a strong spirit of freedom and justice based upon religious precepts. The peoples are mainly farmers and herdsmen and fisherfolk. In the far north there are some foresters. Militia contingents bear crossbow, spear, or polearm (fauchard or glaive most commonly). Standing forces number around 5,000 total horse and foot, plus the nobility and gentry. The Prelacy is strongly supported by Nyrond as a buffer between that realm and that of the Overking, and pay a stipend to help support the standing army of Almor . . . (Gygax)

The only enlargement on the state's description that I could find prior to the Greyhawk Wars came from a Rob Kuntz article in Dragon Magazine #65, Greyhawk's World: News, Notes, and Views of the Greyhawk Campaign (pg. 11 - 12), which discusses the efforts of Almor and Nyrond to block the Great Kingdom's expansion of its boarders. This paucity of information on the Prelacy of Almor is a blessing as it allows me to build the state in a way that not only suits my purposes but provides me with a loose enough framework that I can let my players really push the story in any way that appeals to them without the Canon Nazi in my head screaming out, "THEY CAN'T DO THAT!"

Now after the Great Kingdom expands the Prelacy of Almor recieves more attention but I have no interest in exploring that era at this time. For my purposes it becomes far less interesting when you already know the outcome of the war; when you know that your only hope is to salvage through the ruins of hamlets and towns looking for the bits and pieces that you can sale to ruthless traders. No, it's far more exciting when you can explore the intrigue of states waging a cold war and steadily bringing up the temperature. That side of things makes my mind race with excitement and has gotten me to begin working on a new campaign for the first time in months - and that means I need to chase and nurture it once I've caught it.

Works Cited
Gygax, Gary. A Guide to the World of Greyhawk Fantasy Setting, A Catalogue of the Land of Flanaess Being the Easter POrtion of the Continetn Oerik, of Oerth. Random House. United States of America. 1983. Print.

At Gen Con this year Critical Role, a web-show that features a talented group of voice actors playing Dungeons & Dragons, filled a 1,500 capacity auditorium. The enthusiastic crowd prompted Morrus over at EN World to discuss the effect celebrity players have on the role-playing game industry as a whole.

Without a doubt we are seeing the rise of celebrity players. For several years now we've been seeing people slowly becoming known for how they play role-playing games through podcasts, web shows, and the like; but in doing so we've also missed a critical aspect of what such things have been doing for us as a whole. Mike Mearls, Lead Designer of Dungeons & Dragons Fifth Edition, put it a little bit of an interesting spin on the whole thing:

". . . It’s interesting seeing reactions at GenCon to Critical Role’s show in Indy. Illustrates a big divide in how designers grok TRPGs these days (source). It’ll be great to see a higher level of awareness of how RPGs have transformed and what that means for their future (source)

I believe that the rise of 3/3.5e and online discussion forums created a massive, fundamental shift in how RPGs were viewed and used (source). 3e, and then into 4e, D&D was very dense, rules heavy, complicated, and filled with character building options. That was the game (source). That spread to other RPGs, placing the baseline complexity of the typical RPG at the extreme upper end of what we saw in 80s/90s (source). At the same time, online discussion veered heavily towards character optimization and rules details. It was a culture of read and dissect (source).

Both the indie and old school design movements rose in counter to this, focusing much more heavily on actual play at the table (source). However, the prevailing, forum-based online culture made it very hard to communicate meaningfully about actual play (source). That changed when streaming and actual play vids became accessible to the average DM. The culture of actual play had a platform (source).

We can now meaningfully interact based on what we’re doing when we play, rather than talk about the stuff we do when we don’t play (source). This is HUGE because it shifts the design . . . [conversation] away from “How do we design for forum discussions?” to “How do we design for play?” (source)

As game designers, we can actually watch how RPGs play and what rules and concepts facilitate the effects we’re looking to create (source).

The tension between theoretical discussion vs actual play has always been a big part of RPG design (source). I believe at the table ruled for a very long time, swung hard to theory, and now back to table-driven design (source). Theory is useful, but it has to be used in service to actual, repeatable results in play. And I say this as someone who veered to theory (source).

So in a series of 14 tweets, that’s why I see Critical Role at GenCon something that can be very good for the hobby and designers (source).

Addendum: This ties into the huge success of 5e and the growth of RPGs – people can now learn by watching. The rulebook is not a barrier (source). We don’t learn sports like baseball or soccer by reading the rules – we watch and quickly learn how to play (source). The rulebook is a reference, like the NBA’s rulebook. Comes out only when absolutely needed. Barriers are now gone. Design accordingly . . . (source)"

By and large Mike knocks this one out of the park. D&D 3e and D&D 4e were both cumbersome in the sheer volume of rules, and rule variants, they presented - and that's spoken as someone who loves Third Edition - to the point where it became a challenge just to learn enough of the rules to begin play. Fifth Edition, and to a large extent most modern role-playing games, have moved in the opposite direction going towards a play centered focus where rules not only can be hand-waved when they get in the way of actual play but where it's actually encouraged by the designers to do so. After drowning in the sea of rules Third Edition dropped on us it's like a breath of fresh air.

WTF is a Canon Nazi?

A Canon Nazi is an individual who not only loves the official story of a setting, but who places that story beyond the enjoyment of others in exploring different aspects of the story. Any deviation is a moment for the Canon Nazi to lose their minds and tell others how wrong they are for stepping away from the official script.

Edited 4:01 PM, August 7, 2016
Originally this post appeared as Canon Whore but after a rather excellent series of comments from +Nate McD and +Jesse Morgan it became clear to me that Canon Nazi was a better combination by far. - Charlie
at August 07, 2016 2 comments: 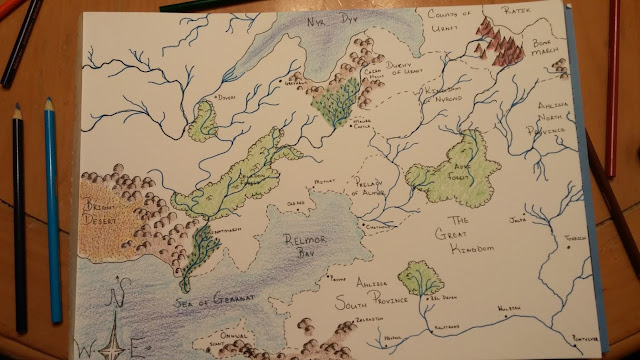 Here's the game. In the map above that I'm going to be using for my next adventure there are quite a few things different about it from the traditional maps of the region but if you're familiar with the area at all you should be able to tell where it is and roughly when it takes place. So the question is: In what nation is the adventure being set? Bonus points if you can tell me why it's set there.