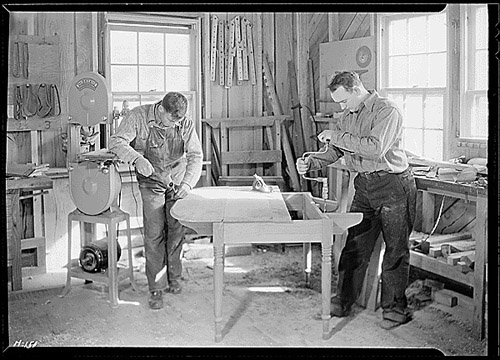 Set of 12 Bits of Varying Sizes
Various Screws and Nails


It's hard to imagine too many groups that will eschew the carpenter's toolkit if they've got the option for a proficiency with it as any real interest in exploring underground dungeons, or abandoned castles, will find the carpenter incredibly valuable to the effort. The carpenter's eye for woodworking and the applications of its practices makes them an ideal candidate for weakening supports, removing doors, creating and disarming traps, and in general just being incredibly useful to have along. Yet there is a problem associated with their equipment that comes from the natural limitations for an individual to carry as carpentry tools can become very large and heavy if you don't keep an eye on what's being brought along.

Since the contents of the Carpenter's Toolkit are still common today I'll not worry with describing each item and instead will note that I have divided this toolkit into two sets. The reason for this division is based around the idea that not every player will want to fully role play the Carpenter but might want to instead play a former apprentice with enough knowledge to do basic work but not enough commitment to master the skill. My expectation is that most people will go for the lighter, and cheaper set.

On a related note I linked to mostly Stanley tools above because they still have a lifetime warranty on some of their tools (with most of them changing over to a limited lifetime warranty) - BUT if you're thinking about picking up some of these tools for yourself then you should really go with Craftsman. The vast majority of Craftsman tools still come with a lifetime warranty and though you'll pay more for them at first, knowing that you can bring in any tool when it breaks and they'll replace it, no questions asked, more than makes up the difference.

I received a message from +Kirwyn this evening that may have some bearing on those of you contemplating picking up Craftsman tools. I've not had kirwyn's store experience and I would have been in the Store Manager's ass if I had, but the fact that anyone thought it was a reasonable way to replace a tool is bullshit of the highest order.


Kirwyn wrote: "+Charles Akins oh man! I used to agree with your assessment of Craftsman tools. No longer.

"A) They're no longer all made in the USA. A few might but I've seen made in Taiwan and made in China on them now.

"B) Still primo price but nowhere near primo quality. The finishes have gone to crap, they no longer have that "feels just right" quality in the hand that they once did.

"C) Their famous return policy is crap. I took back a 1/4" drive ratchet (the pawls gave out) and the guy at customer service asked "well, are you sure you want to bring it back? It has seen some use." I said yes, he goes and pulls out a hand full of other ratchets from the back and says "ok, choose one." The ratchets he brought out we're all returns that had been cobbled together. They were scratched, banged up, dented and one has a piece of the handle ground off, all while being condescending and abrupt.

"I told him that I expected better, I had spent $38 bucks on a good ratchet to be offered this was ridiculous. He shrugged and I still haven't forgotten what he said "get with the times or get out. Your choice." I needed a ratchet that worked so I grabbed one, against my better judgement.

"D) Then I heard about this: http://abcnews.go.com/US/MadeInAmerica/wrench-inventor-claims-sears-stole-idea-china/story?id=17720122

"I will not darken sears doorways again nor will I buy another craftsman tool.

"Fuck sears. They don't even get a capital S from me. I'll save the effort of using the shift key for something worthwhile." ﻿

So I guess that linking to Stanley may be your best bet as the tools I've bought from them continue to be of a good quality and have a solid feel (though not as good as the old Craftsman tools once felt).  They have mostly moved away from their lifetime warranties which were as good as Craftsman's once was and have shifted to limited warranties. I have recently exchanged a tool with them (a wrench that wouldn't stay in position) and had no troubles as they handled my return in an excellent way.
at March 05, 2015