The Book Shelf: Son of the White Wolf by Robert E. Howard 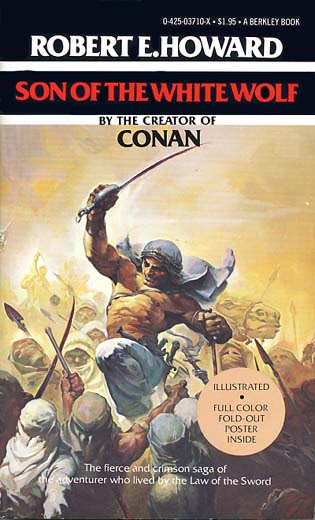 Robert E. Howard was one of the truly great American authors of the last century. He created the Sword and Sorcery genre of fiction and wrote some of the greatest fight scenes to ever appear in literature. He was prolific writing a vast array of poetry, short prose, and works of fiction of all sizes.

Robert E. Howard created characters that you might know, such as Conan, Solomon Kane, and El Borak. What, you've never heard of El Borak?

Well until I picked up the Son of the White Wolf I hadn't either.

Son of the White Wolf is a collection of three short stories featuring my new favorite character, El Borak. El Borak is an adventurer hailing from the American Southwest who has spent his time roving about the Near and Far East earning a reputation as the most dangerous man in the world. In a lot of ways El Borak is Robert E. Howard's fictional version of T. E. Lawrence. His relationship with the Arabs and with the world at large often pulls directly from Lawrence's life and legend, but the character's outlook is all Howard's.

I'd love to tell you all about the ins and outs of this book but it is just too good to spoil for anyone in any way. Do yourself a favor and pick up this fast and infinitely enjoyable read from the master of adventure fiction.