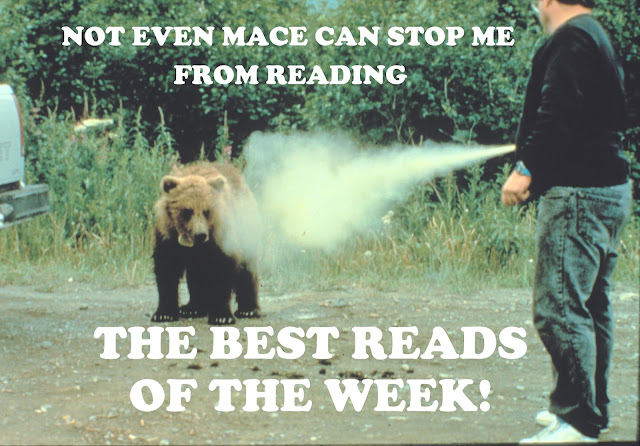 Welcome back to the Best Reads of the Week! Every week I read through more than 450 blogs looking for the best rpg related articles and bringing them directly to you. This week we've got: musings on the edition warring going on with Games Workshop's new AGE OF SIGMAR edition; a FREE PDF of Arksylvania; a couple of love letters to games; and so much more!

In the Grim Darkness of 2015 There Is Only (Edition) War by +Kelvin Green from the blog, Aiee! Run from Kelvin's Brainsplurge: For longtime Dungeons & Dragons fans the idea of edition warring is something of a regular pastime - like catching fireflies in the summer or drinking beer while fishing - but in War gaming, specifically Games Workshop games, it's kind of an unusual occurrence. So this look into what's happening by Kelvin is a fascinating glimpse at the fragmentation of another game's base is really interesting.

Arksylvania Part 6: Taz-Hadamin Empire, Szavokia, Vallachlands by +Jack Shear, from the blog Tales of the Grotesque and Dungeonesque: The final installment detailing the Arksylvania setting Jack's been putting together.

Arksylvania: Free PDF, the Poe Test, Inspirations by +Jack Shear, from the blog Tales of the Grotesque and Dungeonesque: In this post Jack not only provides you with a fantastic FREE PDF of his Arksylvania setting but even goes into examining where the setting came from and if it succeeded his own expectations. Really worth reading for anyone looking to create their own settings as Jack has a natural talent for cutting through all of the fluff and providing you with just what you need to get the most out of the settings you're running.

My favorite Game System. (MEGS) Part of the My favorite game project by +Mark Van Vlack, from the blog Dust_Pan_Games: This post is a love story between one man and a game that hit all the right buttons. If you haven't heard of MEGS then you need to check out this post because Mark is talking about a game that is far too excellent to sit on the shelf collecting dust. We need more games like that in our lives.

Gonzo is Great by +Edgar Johnson, from the blog Edgar's Game Blog: In this short post Edgar discusses eleven things about role-playing games that are now considered 'gonzo' by some people. It's an interesting look into the concept and how it has become a fashionable term to describe anything and everything under the sun.

Light Theming and Mood by Archon Shiva, from the blog Further Up the Spire: Do you ever use lighting changes in your games to help establish a mood for the session? Archon Shiva does and this post detailing some of their efforts kind of makes it seem like not doing so has been cheating your players. Now if you'll excuse me I have to go buy some LEDs.

The Return of Supremacy by Stuart, from the blog The Great Game: Have you ever played the board game, Supremacy? If you're like me you probably haven't even heard of it. But after reading this enjoyable review by Stuart you'll find yourself scouring every flea market and swap meet you know trying to get a copy.

Re: why I love Apocalypse World by +Patrick Henry Downs, from Nerdwerds: I'll be honest with you, Apocalypse World has never interested me - that is until I read this post by Patrick. He manages to make an eloquent case for the game that has gotten me to purchase a copy this morning. If you haven't played Apocalypse World, or have been on the fence about it, check out this post.
at August 29, 2015