The Book Shelf: Another Fine Myth by Robert Asprin 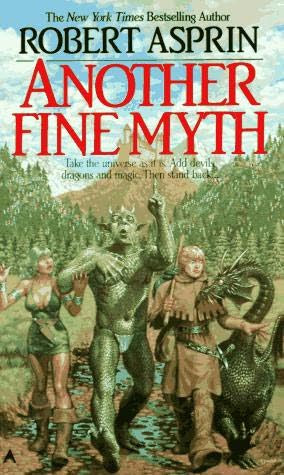 Another Fine Myth by Robert Asprin is one of those funny little books that once populated the literary landscape like daisies. At one time everyone liked daisies and they covered flowerbeds from Nantucket to Montgomery; then we all realized that daisies are rubbish and burnt our gardens to the ground.

I, however, like daisies; and I like Another Fine Myth. In the novel Mr. Asprin has found a beautiful little world that is nuanced enough that it presents a unique world view with enough depth to inspire a legion of subsequent novels.

Taken at its face the novel is a silly little thing that barely deserves to be read. It proudly proclaims its support of humor's least humorous joke, the pun. For this offense I avoided reading the novel for nearly a year and a half - and pity me for putting off such an enjoyable read.

Another Fine Myth is an intriging novel that presents a uniquie take on everything from how a wizard actually hides their wealth to Deevils, Deamons, and dragons. Mr. Asprin's take on Deevils in particular will change how you imagine one acting. They don't ooze evil through their poors and you don't immediately feel like the Deevil is the most dangerous creature in the room - far from it - but that's what makes the character so damned inventive as even when you think the Deevil has taken the worst end of the deal he's actually outwitted you.

Though the puns do get a bit heavy handed at times the book is a fantastic read.