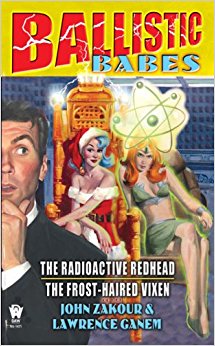 One of my favorite series right now is the Zachary Nixon Johnson adventures. The titles to the books in the series always read like they're from some pulp era magazine and this latest addition to my collection, The Radioactive Redhead, is no different. The books themselves have a definite formula: Zach has his life endangered by some outside group - be it mutants, criminal organizations, robots, or genetically modified superhumans - shortly thereafter he's contacted by a seductive woman that needs his help, and of course the situation always gets more complicated the deeper in he goes. They're just a fun and enjoyable read.

The Radioactive Redhead is slightly different from some of the other stories I've read in the series as it largely feels like a scenario that you might find in any modern detective story. A singer, Sexy Sprockets, is being pursued by an obsessed fan and that obsession has begun to turn violent as there have been increasingly hostile acts done towards her. She then hires Zach to guard her and from there things quickly go away from the usual and solidly into more familiar territory for the series as acrobatic assassins, psychics, and even crazed television producers all make an appearance in this entertaining adventure tale. If I'm being a bit vague here it's because I genuinely don't want to ruin anything in this story for anyone who might pick it up.

I picked up my copy on Amazon with the Ballistic Babes Omnibus, which contains both the stories The Radioactive Redhead and The Frost-Haired Vixen, for $4.20 used since the omnibus is no longer in print. I keep hoping that Zakour will pick the series back up but there haven't been any new stories in about three years so I'm going to keep making my way through those he's published and hoping new ones are percolating.

By the way, in the interest of full disclosure, if you click on that link it's through my Amazon Associates program so I get a small referral payment if you purchase anything. Thank you if you do, and thank you for reading.
at August 02, 2017