Go Back Inside the Coyote Said, And I Didn't Listen 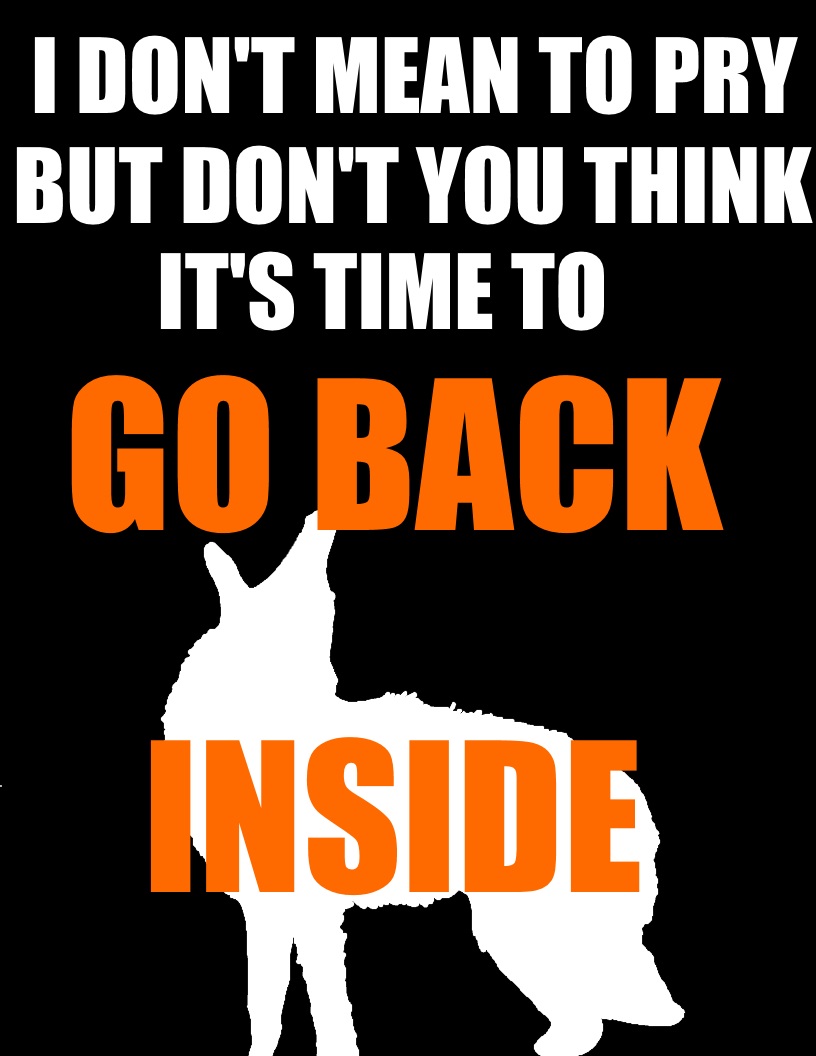 I was sitting on the stoop in the rain last night with my cocktail getting refilled by God when a coyote came wandering up to me. It was soaked to the bones so I waved it over and offered it a drink to warm it up.

"I don't mind if I do," the Coyote said as I poured him a bit of vodka into a bowl. We sat there beside each other drinking in the rain while the night birds watched us from their limbs with wide-eyed wonder. "I don't mean to pry," he said with a polite cough, "but don't you think you ought to go back inside?"

"Inside," I mutely said, "inside to what? The house is quiet and my drinking disturbs her slumbers."

"Pity," said the Coyote, "I would have thought that after all the years you've been together that she would have built up a tolerance."

I smacked him on the nose, "Enough of that talk."

"That was an unkind turn," he said as he ran a paw along his snout. "And to think I had considered telling you where the hid that gold they took off the Spainards.”

“Your lies were more convincing back in the days of my youth when you came to me with tales of dragons and dying knights watching their ladies fair waste away on the stake.”He sat there on his rear looking out into the night for a moment before he gave a little shrug and said, “Things are hard all over these days.

“The Children of Adam are too busy to remember to dream any longer and when they do it is only about money and laying down with strangers who scream their names in orgasmic glee for years to come.”

I refilled his glass as we watched the rain come down harder. Old Owl sat in the magnolia tree near us listening to the silence. For a time he was content with that but that did not last. “What I want to know Son of Adam is why your kind have taken to poisoning the mice in my field.”

“Which field,” I asked him.

“The one behind you here. Where the deer run from Coyote’s children and the wild dogs play their silly games.”

“Oh,” I said with a shrug and another sip of my vodka water, “that was me.”

He flapped his wings in anger and hooted loudly, “Why in the seven hells would you think to do that!”

“Mother fuckers should have stayed out of my house.”

I refilled his glass.“What I don’t understand,” I said as I took another sip, “is why the only literature that really speaks to my soul these days is wrapped up in the doom of my generation. Existential Man makes me want to slit my throat; Tropic of Cancer has me wishing that I could hide a forty-five in my mouth long enough to pull the trigger; and there is no salvation in the fantasies that creep into my dreams.

“I am bereft of hope. Cast out on a shore from which there are no shipping lanes going near me, no flights over head, and no currents going back out into the ocean. I am alone here in my head bound up in a grief that threatens to overwhelm me entirely.”

“So you drink,” said the Coyote flatly.

“So I drink with the Coyote by my side refusing to listen to your counsels and lies.”

“But you killed the mice with poison,” the owl in his outrage hooted!

“I poisoned them the same way that I’m poisoning the ants that have made a fortress in my walls! Listen to them owl,” I said as I pointed at the light, “listen to them in there whispering to each other about the next great suck and fuck fest they’re going to be throwing tomorrow when they play their electronic music and bang their drums over my son’s bedroom giving him nightmares about gigantic dinosaurs without boundaries that keep trying to get him to just try a little E!”

“Does that actually happen,” Coyote asked as he raised up from his bowl.

“Fuck no,” I said as I sat back down and refilled my glass, “but it should.”

“Poison is bad for all of us Charlie,” Owl admonished me.

“The fuck you say.” I responded flatly. “Imagine that, Coyote, the Owl is trying to lecture me on the use of poisons. It’s not like he taught us how to use Mustard Gas for the first World War when he wanted us to slip off the face of the earth again.”

“Really now,” Owl said, “are you never going to let that go.”

“I certainly wouldn’t,” Coyote said as he crept under the tree. “The Sons of Adam are not known for their short memories you know.”

“For that you get a steak!”

“No need,” Coyote said as he leapt into the tree and caught Owl in his jaws. “I’ve got more than enough to eat here.”

“I -,” I began, but then I heard it. A little voice crying out into the night, screaming, “Daddy, Daddy I need you!”

Coyote let Owl go to tell me goodbye and raced into the night looking for mischief to be had while Owl hooted once and said, “You should forget about that War and stop using the poisons.”