The Book Shelf: Leviathans of Jupiter by Ben Bova 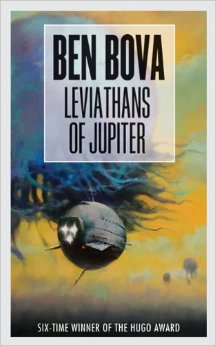 The Leviathans of Jupiter follows Deirdre Ambrose from her home in Chrysalis II to Jupiter and into an adventure of a lifetime with the massive Leviathans within its depths. The pacing of the book is fast and the 500 page volume is easy to quickly read in large chunks as Bova's writing style is pitch perfect for the adventure within.

Where Bova excels in this novel is when he's describing moments of action - the Faraday's first trip into Jupiter's endless sea, the crew's first contact with the Leviathans - and in moving his characters quickly through the plot, developing them along the way into nuanced and relatively complicated individuals. But it is in the development of those characters that a major weakness for this novel is exposed: the interpersonal relationships make no sense.

The main villain of the book, Katherine Westfall, goes from being power hungry to a full blown psychopath without any reasonable explanation. Which is a shame because early in the book it's easy to root for her, as well as, Deirdre and her friends. Westfall is manipulative yet her drive makes her relatable and then she suddenly shifts gears and becomes a psychopath with no warning beforehand. It's as if the woman who's trying to become your company president suddenly decided that instead of bribing people to get what she wants she takes a .38 and starts shooting people. It just makes no sense with where the character was earlier in the book.

Then there are the romantic relationships. These just appear to come to fruition without any explanation or actual, real build-up and yet we're supposed to accept that these are meaningful to the characters in a way that simply doesn't happen. It's an upsetting aspect of the book that found me putting it down and wondering why it was done.

The Leviathans of Jupiter is a book that succeeds on many levels, yet falls into contrived pitfalls of the author's own making at times. I will definitely be reading another Ben Bova book as this one was very enjoyable other than the few, minor, issues with Westfall and the romances. Well worth picking up if you can find it for a good price.


By the way the cover of Leviathans of Jupiter was made by John Harris and was the whole reason why I originally picked up this book. It's fantastic and I am actively saving money to pick one of the prints from his website.