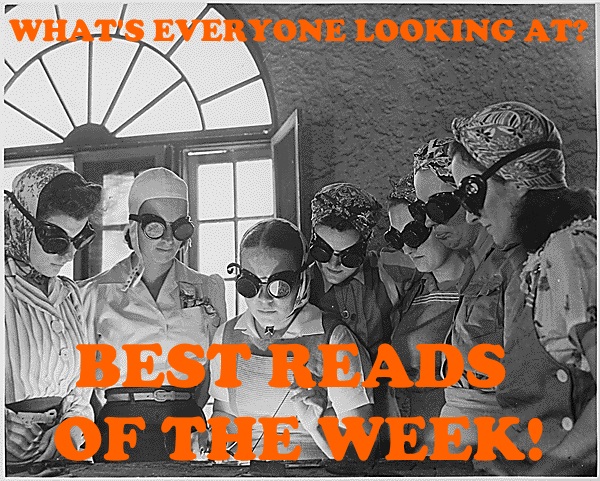 Welcome back to the Best Reads of the Week! Every week I read through more than 450 blogs looking for the best rpg related articles to bring them directly to you. This week we've got the history of the "known world;" thoughts on the D&D release schedule; game reviews; the best of January; and so much more! If you see a post that you like be sure and tell the author how much you enjoyed it!


If you've got any questions about this month's lists be sure and check out the FAQ. And as always, thank you for your comments, shares, plus 1s, and for taking the time to read this list. See you on the next set!


The “Known World” D&D Setting: A Secret History by Lawrence Schick, from the blog Black Gate, Adventures in Fantasy Literature: In this interesting article the author recounts his experiences creating the "Known World" with Tom Moldva. It's really neat reading what went into forming the setting and his own understanding of how successful they were in creating it.

Not Your Daddy's Steampunk by +Billy Billerson, from the blog Billy Goes to Mordor: Over the years I've had a lot of problems with the idea of a steampunk setting, and Billy's explanation of his problems seems to put my own issues into words better than I have ever been able to do in the past.

Them Dungeons & Dragons 5th Edition Blues by +Joe Kushner, from the blog Appendix N: The support for Fifth Edition seems incredibly sparse when compared to what we saw in nearly every previous edition of the game. For some of us that's beginning to drag us down.

Norsemen & Giants, Iron Edda: War of Metal & Bone by +Kevin Smith, from the blog Melvin Smif's Geekery: When it comes to trying out new role-playing games there is always a danger that you'll go into it blind and pick something terrible - which is why I love great reviews like Kevin's.

Who's Afraid of the OSR by Smiorgan, from the blog Department V: Sometimes it seems like anyone who tries to talk about the OSR runs into loud, braying calls of, "That's not my OSR!" Still that didn't stop Smiorgan from discussing the subject in a way that brings a bit of fresh air to the subject.

Why Do We Even Roll Dice? by +Adam Muszkiewicz, from the blog Dispatches from Kickassistan: Dice have a special place for a lot of us and in this excellent post Adam discusses why they matter in our games.

Hacking the System - Why Do It? by +Mark Knights, from the blog RPG Knights: Have you ever wondered why some Game Masters always seem to be tinkering with their preferred rule sets instead of just moving on to another game system? Mark has some excellent thoughts on the subject that may answer that question for you.

Murder Hobos and the Supply Curve of Evil by +Emily Dresner-Thornber, from the blog /project/multiplexer: Have you ever considered the far reaching impact of your players' actions on the world they're exploring? Emily has and her thoughts on the wide ranging repercussions for the world are fascinating.


State of the RPG-verse by +Nicholas Bergquist, from the blog Realms of Chirak: If you look at the way that the industry is heading it's hard to be super optimistic even as we're told by ICv2 that sales, as a whole, have continued to climb for the last few years. But is that just an impression we're given by being online and the negativity that comes hand-and-hand with that, or is there something more substantial there?

Acceptable in the '80s: Dale Hurst's Tzeentch Warband by +Orlygg Jafnakol, from the blog Realm of Chaos 80s: This look at Dale's Tzeentch Warband article, which inspired countless others, has inspired me too. Really worth reading for anyone who's into miniatures.

Concept is King by Tom Doolan, from the blog Wishful Gaming: For some people the characters that they play hold to a concept that they've wanted to explore or to act out. And when you have someone like Tom doing that you know you're in for a great time!

Indoctrinating the Youth by +Ben L., from the blog Mazirian's Garden: If only all of us had someone like Ben come into our lives when we were young!