Mock-Up Cover for the Princes of the Apocalypse Player's Guide

This morning I was kicking around on the Princes of the Apocalypse Player's Guide when I noticed that the cover was that cropped version of Raymond Swanland's painting. There's nothing wrong with Swanland's painting, in and of itself, but the way that Wizards of the Coast cropped it has just always felt a bit lackluster. So I thought that I would mock-up one based on some of my favorite book covers. 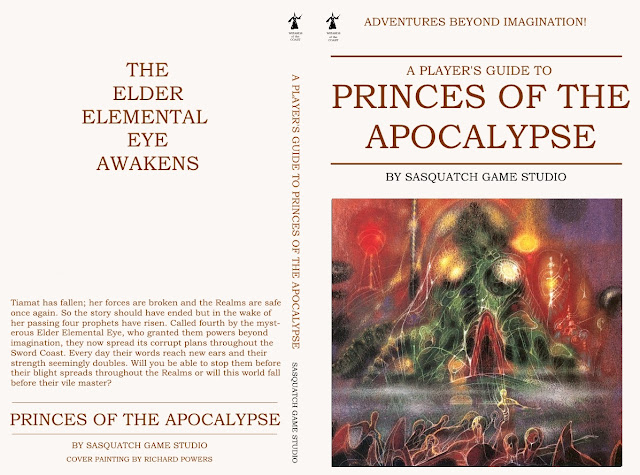 I patterned it off an old A Canticle for Leibowitz

cover that Bantam Books put out back in 1976 that I just loved. That cover, I believe, was done by Richard Powers. Powers was a fantastic artist whose work is featured on so many covers that it's hard to list them all but just know that the guy was an amazing artist who should far better known. In fact I like him so much that I used another one of his paintings, this one from the War of the Worlds, for this mock-up cover. Lord knows it's a hell of a lot creepier than the one they're using now. Oh, and on the spine and on the front cover I used the old TSR wizard and put Wizards of the Coast under him because I like that logo a hell of a lot more than the one they're actually using.

The cover is a jpeg and is set up dimension wise for the 6 x 9 US trade which should make it possible to use. Either way I hope that you cats like this mock-up because I might be doing a few more.
at June 18, 2015

Email ThisBlogThis!Share to TwitterShare to FacebookShare to Pinterest
Labels: Art, Mock-Up Covers, Princes of the Apocalypse