Ravenloft? Yeah, I Can Do That.

I've decided that I'm going to be running a Ravenloft game. See the problem for me though is that most of the people that want to play in it with me have this colossal hard-on whenever it comes to the setting. They start stuttering about it when it comes up and every couple of sentences find "Oh my God" ejaculated into the conversation with hands outstretched and orgasmic looks passing across their faces. They have constructed these elaborate fetishes around the setting. The world is ultra deadly where even the rabbits on the side of the road will kill you and devour your souls. "Oh my God!" The gypsies are all cat burglars who will lift all your possessions without you knowing about it, "OH my God!" And let's not even get started on the vampires. "OH MY GOD!"

Look I like Greyhawk and if you ever follow me on Twitter you're sure to see me throwing #GREYHAWK tags about like they're gang signs and I'm representing. The thing is, I do that because I like it, not because I go home at night and touch myself under the covers while whispering Otiluke's name until I get gooey. The way these cats have constructed their Ravenloft fetishes is beyond me. 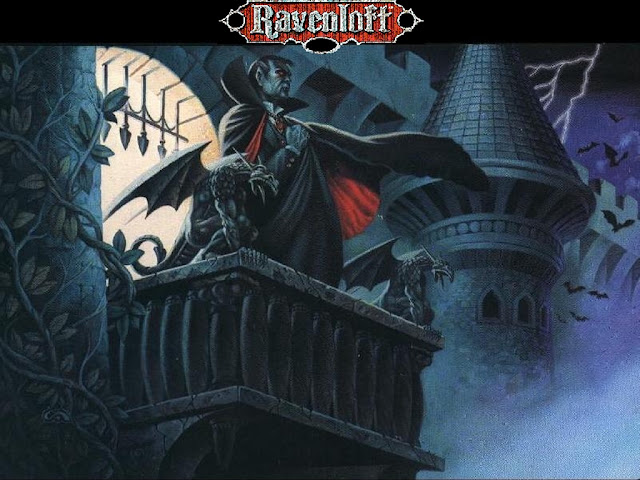 So I'm going to run it my way.

The game begins before we actually start playing with me loudly announcing to the group that we'll be playing in Ravenloft. I'll even go so far as to lay out the Expedition to Castle Ravenloft

book so they can see what's happening. Then I'll throw open the gates. They can pick any race, any class, any feat, any items they can afford, and they'll be starting at fifth level.  The day of the game comes and I'll make a big show of going through the book while they're talking and getting ready. Then I'll start. They're in a city - it doesn't matter which one - and I'll fill it with fog; a wolf howling in the distance. At this point their own imaginations will be filling in the gaps. They're there: Ravenloft.

Only when they go inside everyone they meet is going to be super friendly and excited to meet them. It's like walking into a convention, only without the open bar, and these cats are super excited for visitors. They're talking about the rain washing out the bridge and how they're glad these guys have made it here. The whole city is getting ready for the festival of Saint Sidney and they're opening up their doors to the players. Now the players are off their game because they were expecting a world that's ultra grim dark with a side of grim and a glass of dark. But I'm giving them sunshine, roses, and a city that's looking for a good time. Everywhere they go it's going to look and feel like a normal city and the only thing anyone tells them wherever they go is don't use the outhouse near the Red Snow Tavern. If pressed on it they all just shake their heads and say, "Seriously, don't go in that fucker."

I know my players and that's enough to get them heading to that outhouse where they'll find a great big sign that says stay out and a gem the size of a football when they look down the shit hole. These cats aren't going to pass up that football with a dragon sleeping on it so you know they're going to go for it. That's when the gigantic Purple Worm explodes out of the shitter and eats however many players where in the outhouse. I expect that they run with a few, "He's fucked," and at least one,"Peace out, bitch," as they get the fuck out of town. 'Cause this Purple Worm is going to be pissed and tearing the city to bits.

So they're booking it out of town and they're going to run into this old Japanese man who looks like he's getting ready to try out for a samurai movie. He only speaks Japanese and I only know like three words so it's just going to be mostly gibberish as I shove a bottle into their arms that has this big cork stopper in it and take off. If they open it great, if not the old dude will have a thread tied to the cork that he'll pull to release the Tarrasque. This mother fucker will kill all of the players as he charges off and starts fighting the Purple Worm because I like Godzilla movies and it's about fucking time that I had one in a game.

Now the players are going to wake up in Castle Ravenloft - cause if I've had them go to all that trouble then they don't need to see it all wasted. So they wake up and there's the Count doing his best Bela LuGosi impression with the cape and everything. "Oh my god!" He turns to them and with a gesture to the table implores them to sit down. And they do because they've got this shit built up in their heads that this guy's a god damned vampire capable of destroying them with but a look. "Oh my god!" Whispers all around the table at this point. Furtive glances to each other as they're served food by half naked men who only have compression shorts on and body glitter. And then the count speaks and he's so gay that he makes the Pride Parade seem like an exercise in repression. The Count doesn't pine over that girl who died. "That bitch just won't move on," he'll say, "I told her she was ratchet as fuck but she keeps on moaning."