The Child Thief of Greyhawk, Murq the Wizard 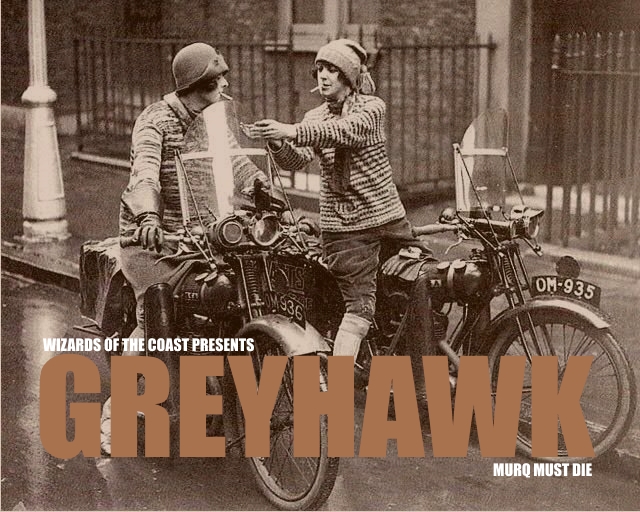 Last night I was reading the Glossography for the Guide to the World of Greyhawk when I ran across a villain that actually made me catch my breath.

". . . Fifteen years ago, the city of Greyhawk . . .  was plagued by a series of strange disappearances among the youth of the noble families. The children simply disappeared at night, never to be seen again, though sometimes they were replaced by simulacrums that committed vile blasphemies and had to be destroyed. After investigation both magical and mundane, the city magistrate determined that the wizard Murq was behind these awful outrages. (His exact purpose was never ascertained.) When a grim and determined group of high level guardsmen was sent to apprehend Murq, he had already fled, leaving behind only another simulacrum that was killed vowing vengeance upon the magistrate and the city.

The magician Murq and his outrages have almost been forgotten. Recently, however, the respected magistrate’s sleep has been invaded by evil dreams. In these nightmares, mad Murq appears surrounded by a cold fen, threatening the magistrate and the city with doom. He boasts of having found an ancient volume of great power, whose secrets are enabling the magic-user to create a mist golem. This creature, Murq claims, can slay others, but cannot itself be slain. When the stars are right, the golem shall be finished. Then it shall be sent to kill; first the magistrate, then anyone it can find, until everyone is slain or driven out of the city . . ." (Gygax, pg 26)

The abduction of a child is one of the most terrifying things imaginable for any parent and here is Murq, the child-thief of Greyhawk. Think about him for a minute. He comes in the night after you've put your children to bed and takes them away, never to be seen again. Not only does he take away everything that really matters in your life in that moment but if you're really unlucky he leaves you a present that looks just like your child. Only in the place of your child is an abomination before the gods.

It's hard to imagine what act Murq could have the Simulacrum perform that be so vile that it must be destroyed. Did he have them simply doing their best impressions of the Exorcist? Or did he have them begin summoning demons from the abyss into their bedrooms when their parents entered? Was he trying to bring one of the Demon Lords into the heart of aristocratic Greyhawk?

Murq is a perplexing monster in the setting. On the one hand he feels as though he could be just another serial killer hunting down and sacrificing children to vile gods; but what if there's more behind his actions? He's only attacking the nobility in this blurb. Could he an extension of the anarchists who murdered and rioted their way through the early 1900s and were popping back up in the 1960s and 1970s? Or is he just a nightmare given life in the world of Greyhawk?

No matter what his motivations the son of a bitch needs killing and I would have gleefully joined any party rushing his home and would have rushed headlong into his room hoping that my axe would be the one to sever his head from his dainty, little shoulders. But that wasn't how it ended for Murq because he got away and then he did got on the edge of doing something that terrifies every player in the game: he nearly created an unbeatable opponent. The mist golem he haunts the magistrate's dreams with is the sort of thing that no player in his right mind would ever allow to enter into the game's world - nor would any of us allow that technology to slip through our fingers if there's a chance that we might be able to send that bad boy against our enemies later in the game (hey we might be the good guys, but we're just not that good).

What happened to Murq? Did the players kill him? Did they save the kids? We wouldn't know the answer sixteen years when he would be mentioned in 1998's Greyhawk the Adventure Begins:

". .  . Hardly less notorious was the rogue wizard known as Murq, who, in 561 CY, kidnapped two-score children of Greyhawk’s noble families and fled the city. The fate of the children was never determined, though a group of adventurers (subtly guided by the Circle of Eight) tracked down Murq in the far north and, through a magical construct, prevented him from attacking the city again. The fate of Murq and the children was never revealed to the public . . ." (Moore, 61)

So the answer is we don't know for sure but there is a possibility that appeared in Murq's final appearance two years later in the article Greyhawk Grimoires from Dragon Magazine #269:

". . . A search of Murq’s abode offered no insight into his motives for the kidnappings, nor what became of the children (though it was frequently postulated that they had been sacrificed to some nefarious deity), Furthermore, investigators found nothing that could be used to track down the wizard. Indeed, Murq had disappeared without a trace, just as his victims had done . . ." (Mullin, pg 64)

It's obvious that the conclusion that the Mullin reached is that he children were sacrificed to some dark god but I have this crazy theory that Murq was actually playing with powers far deadlier for Greyhawk than just some distant god that barely notices some robed loser sacrificing children in their name. No, I think that Murq was trying to bring in one of the Demon Lords in a bid to take over Greyhawk. Which one?