The Book Shelf: City of the Chasch by Jack Vance 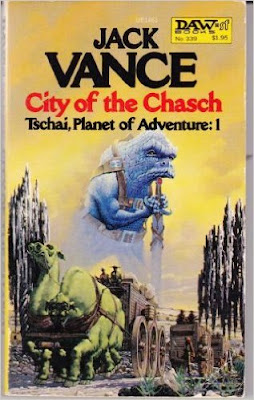 The City of the Chasch is the first novel in the Jack Vance's Planet of Adventure tetralogy and it's also the first novel I've ever read by the author. Having hear of Vance's reputation for years before picking up this story I had high hopes for what was to come, but the first 16 pages almost did me in. Vance begins writing the conversation his introductory characters are having in what I recognize as a Robert Heinlein style only he clearly doesn't have Heinlein's ability for delivering a quick paced and witty dialogue. Thankfully Vance quickly abandons the style for ground where he's clearly more comfortable.

The lead character of the Planet of Adventure series is Adam Reith - a quasi-combination of scientist, engineer, and Green Beret - who crash lands on the newly discovered planet of Tschai and is promptly captured by a bunch of savage humans who mysteriously live on the planet. It's here that we meet one of his two long time companions in Traz Onmale. Traz is the leader of the tribe Reith has been captured by and the two slowly but surely develop a report. Soon, however, events transpire to make their report Traz's downfall and the two are forced to flee from the tribe and make their escape across the wilds of Tschai. It's in their escape across Tschai that the adventure really begins in earnest as Reith meets his third companion, Ankhe at afram Ancho (simply referred to as Ancho by Reith and Traz), and then encounters a wide variety of aliens deadly wildlife.

Vance's writing really shines in the scenes where Reith, Traz, and Ancho are making their way through the wilds and encountering the early dangers of Taschai. Every new encounter feels familiar and yet alien enough to remind the reader that Reith isn't on just another version of earth but on a whole new world. It's a clear sign of a master working at his craft. Which leads me to the other thing that I really love about this book, and about the series as a whole, and that is how Vance skillfully blends the use of futuristic technology with medieval weaponry. In the same scene where you'll see aliens flying about in sky cars he'll also have sword wielding human beings and gun totting bandits. It's a juxtaposition that serves him well and that makes these wild moments where Reith is racing to save himself or one of his companions all the more exciting. His exploration of the Chasch city and his revenge on the bandits who control the city of Pera exemplify why this juxtaposition works so well.

Overall the City of the Chasch was an excellent introduction to Vance and a very enjoyable book. I cannot recommend it highly enough. I do have some advice to offer if you plan on picking it up; though, instead of purchasing the four individual books in the series save some money and buy the omnibus like I did.

Also, check out this bitching cover without the text on it. Not at all how I pictured the Blue Chasch but it's pretty fucking awesome all the same. 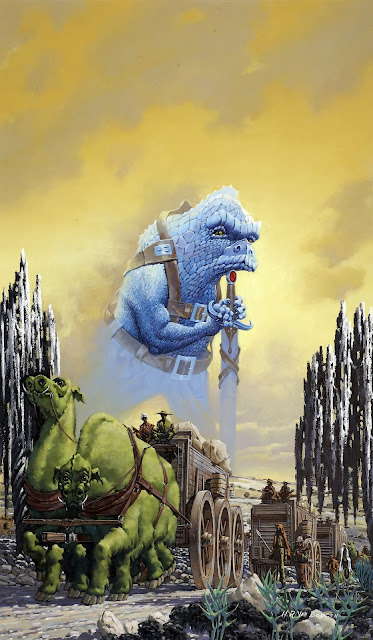