Cthulhu and the Old Ones Sing the Blues: Introduction

I like big projects and series that tend to push me to accomplish things with my blog that I wouldn't otherwise attempt. It keeps me honest. It motivates me - and right now I need that because I have a lot that I want to do on the blog this year. Anyway, way back in December, 2016 I got this bright idea that I was going to do a complete read through of H.P. Lovecraft's fiction so I purchased a copy of The Complete Fiction of H.P. Lovecraft from Amazon and waited. 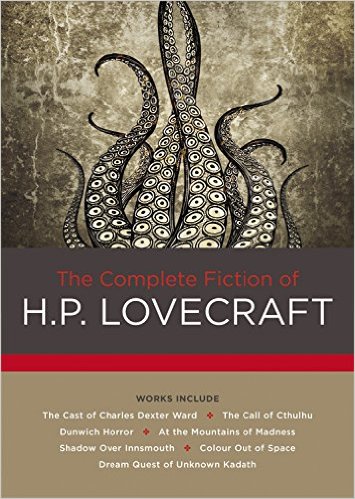 Then it arrived  earlier this week and I was thrilled. The book looks to be of a fair quality and I absolutely love the subdued cover.

So here's the deal.

Over the course of this year I'm going to be reading all 69 short stories and novellas contained within this weighty tome. As I go along I'm going to be publishing my thoughts on the stories here on the blog under the series Cthulhu and the Old Ones Sing the Blues because I think that title is hilarious and it's my blog. You're more than welcome to join along in the process as I would love to hear your thoughts as we progress.

Now I should mention that the works of H.P. Lovecraft are in a kind of nebulous space within copyright law as there is a party that claims ownership of the copyright but has not yet produced proof of it so far as I've been able to ascertain online. You see you can read all of his works online, for free, from places like hplovecraft.com and the internet archive yet you have a copyright holder who is trying to assert their claim and from here things get into legal terms that I'm unskilled in describing or involving myself in. So instead I'm going to be very clear from the outset that I will be using quotes form H.P. Lovecraft sparingly and only in furtherance of the discussion of his works as is covered under Fair Use. I have no intention of circumventing anyone's claim on the property and have no interest in being sued. My only goal is to explore his works and to gain from them as a writer, reader, and Game Master.

With that out of the way, welcome to the Cthulhu and the Old Ones Sing the Blues!

Table of Contents
Introduction
The Beast in the Cave
The Alchemist
The Tomb
Dagon
A Reminiscence of Dr. Samuel Johnson
Polaris
Beyond the Wall of Sleep
Memory
Old Bugs
The Transition of Juan Romero
The White Ship
The Street
The Doom that came to Sarnath
The Statement of Randolph Carter
The Terrible Old Man
The Cats of Ulthar
The Tree
Celephais
The Picture in the House
The Temple
Facts Concerning the Late Arthur Jermyn and His Family
From Beyond
Nyarlathotep
The Quest of Iranon
The Music of Erich Zann
Ex Oblivione
Sweet Ermengarde
The Nameless City
The Outsider
The Moon-bog
The Other Gods
Azathoth
Herbert West - Reanimator
Hypnos
What the Moon Brings
The Hound
The Lurking Fear
The Rats in the Walls
The Unnamable
The Festival
Under the Pyramids
The Shunned House
The Horror at Red Hook
He
In the Vault
Cool Air
The Call of Cthulhu
Pickman's Model
The Strange High House in the Mist
The Silver Key
The Dream-Quest of Unkown Kadath
The Case of Charles Dexter Ward
The Color Out of Space
The Descendant
The Very Old Folk
History of the Necronomicon
The Dunwich Horror
IBID
The Whisperer in the Darkness
At the Mountains of Madness
The Shadow Over Innsmouth
The Dreams in the Witch House
Through the Gates of the Silver Key
The Thing on the Doorstep
The Evil Clergy Man
The Book
The Shadow Out of Time
The Haunter of the Dark
at February 20, 2017