The Whole of Fantasy and Dungeons & Dragons

Last night I was reading a pdf copy of Europa when I ran across an article by Gary Gygax, How to Set Up Your Dungeons & Dragons Campaign - and Be Stuck Refereeing it Seven Days per Week Until the Wee Hours of the Morning! This was actually the second part of a series he had been writing, which I have yet to fully explore as I haven't found any other copies of Europa other than this one, and I noticed something that I had suspected for some time but not actually seen in print before. Gary wrote, ". . . Now fantasy / swords & sorcery games need not have any fixed basis for the assumptions made by its referee (my own doesn't) except those which embrace the whole of fantasy . . . Settings based upon the limits (if one can speak of fantasy limits) can be very interesting in themselves providing the scope of the setting will allow the players relative free-reign to their imaginations. Typical settings are: Teutonic / Norse Mythology; Medieval European Folklore (including King Arthur, Holger the Dane, and so on); The Fafhrd and the Grey Mouser; Indian Mythology; and Lost Continents such as Atlantis or Mu. Regardless of the setting you can have it all taking place on an 'alternative earth' or a parallel world . . ." (Gygax, 18).

Too often when I read and discuss role-playing games - especially when concerning Dungeons & Dragons - I find that there are all of these established boundaries that delineate what I'm allowed to do with my games. The world must be set in a quasi-Medieval time period. Guns, if they exist at all, should be rare. The world should feel big and the players a small part of it. Oh, and the literary inspiration for your games should come from Tolkien, Martin, or Gygax's Appendix N.

Fantasy, especially the way that the term was understood before we decided to subdivide everything to death, was so much larger than the truncated spectrum that comes from limiting our imaginations to any guiding light. Take for example my own favorite source of inspiration: pulp fantasy. 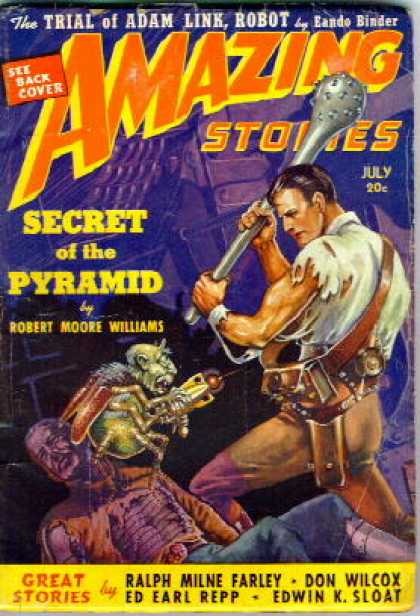 I know that for some of my readers they might be reminded of James Maliszewski's exploration of pulp fantasy and his definition of the term or as he put it ". . . In general, 'pulp fantasy' roughly equates to what we nowadays call 'sword and sorcery.' However, the term is more expansive than that, because it also includes authors and stories that do not, strictly speaking, fall under sword and sorcery, such as Burroughs and other 'sword and planet' authors, as well as 'weird tales' of the Lovecraftian variety. I chose the term because, by and large, most of the authors whom Gygax cites as influences in the famous Appendix N of the AD&D Dungeon Masters Guide were published in the pulp magazines of the 20s through 50s . . ." (Maliszewski).

Unfortunately James' definition of pulp fantasy ignores a large part of what made up the pulp fantasy of the era. As a result, if we were to hold to his definition than we wouldn't consider pulp standards like Doc Savage, Buck Rogers, Tarzan of the Apes, The Shadow, Green Lama, or Zorro as something that we should look to for inspiration in our Dungeons & Dragons games. Our heroes would be craven things who acted out of a slavish devotion to selfishness rather than because they were doing the right thing. We wouldn't have alien battles, tanks, high speed car chases, mystical hokum, or super heroics. Instead we would be bound to endlessly repeating pale imitations of Howard's adventures and Tolkien's quests. 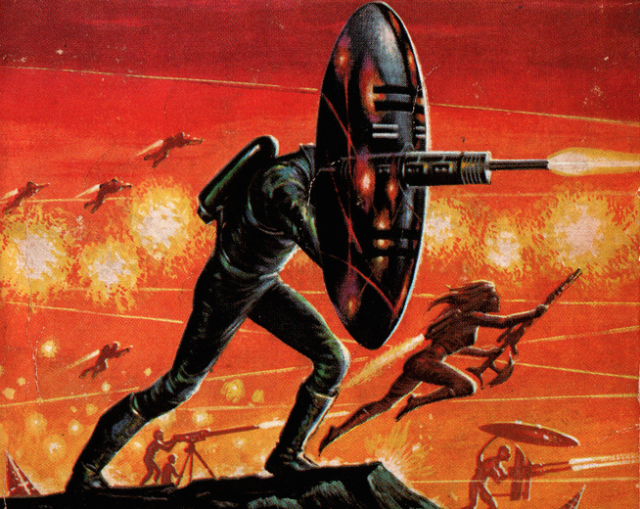 Listen, It's all too common for people to coalesce around an idea and codify it as conventional wisdom. Today in our hobby we have as our conventional wisdom the standard refrain that our Dungeons & Dragons styled games are all supposed to be pseudo-Medieval affairs hinged on the literary roots of Conan the Barbarian, Fafhrd and the Grey Mouser, and the Lord of the Rings; and James held to this line of thought in his discussion of pulp fantasy. As a community we have internalized this conventional wisdom and now it is taken for granted that if we are playing Dungeons & Dragons then it must be this way and any deviation is anathema.

Yet it doesn't have to be that way.

Yes, we can explore a setting bound by certain limits as Gary noted in Europa, but we can also go further and take the game in different directions without it being something other than Dungeons & Dragons. We can hop a ride on the back of a floating cart with hairy aliens and six legged horses to take back our lives like Prince Valentine did in Robert Silverberg's  Lord Valentine's Castle. Or we can race across the globe in a desperate race to get back home after we crash landed on some god forsaken planet like Adam Reith did in Jack Vance's Planet of Adventure novels. We could even fight evil like Buck Rogers in Philip Francis Nowlan's Armageddon 2419 A.D. But we don't; because too often we let ourselves be convinced that if we're playing Dungeons & Dragons it has to be the same way that everyone else has always played it. We have to be Aragon dragging some fat, little halflings half way across the world to save it on an epic quest; or we have to Conan sneaking his way through the palace.

I have spent the better part of the last decade having fun exploring worlds like that but they're not enough any more. I want my games to be more. I want aliens. I want laser guns and high speed rocket chases across the universe. I want to fight evil. I want to out smart the villain and save the day. I want to go to sleep and wake up a thousand years later only to jump right into a gun fight as I rush to the aide of some poor sap beset by vicious gangs.

There is so much out there for a Dungeons & Dragons game to be that isn't just a rehashing of Howard and Tolkien. I want all of it. I want the whole of fantasy. 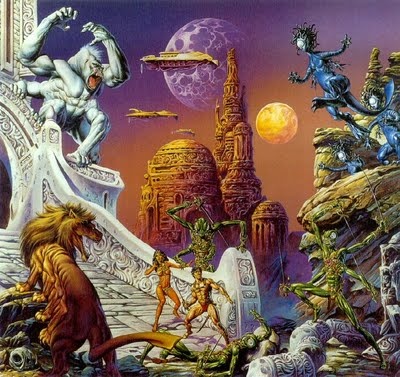 Gygax, Gary. "How to Set Up Your Dungeons & Dragons Campaign - and Be Stuck Refereeing it Seven Days per Week Until the Wee Hours of the Morning!" Europa. April 1975. pg 18. pdf