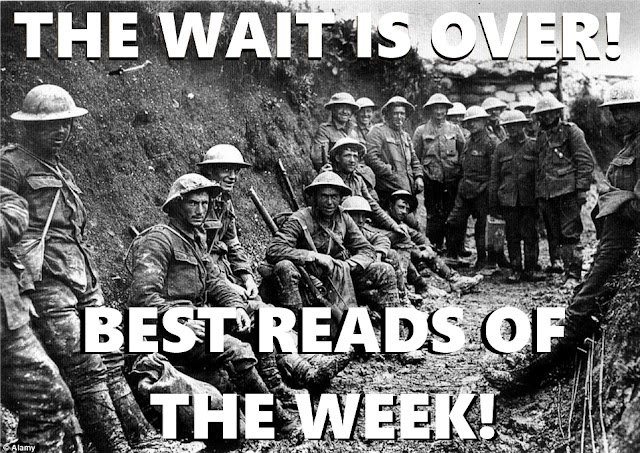 Welcome back to the Best Reads of the Week! Every week I read through more than 450 blogs looking for the best rpg related articles and bringing them directly to you. This week we've got: a FREE adventure from +Sean Bircher; +David Dolph is asking if this is the last edition of Dungeons & Dragons; a fantastic way to bring new life to encounters with elementals; thoughts on where GURPS goes from here; a love letter to Castles and Crusaders that will have you checking that game out; and so much more!

GM Advice - no time for introductions by +Moe Tousignant, from the blog Windsor Gaming Resource: When it comes to starting the adventure a lot of Game Masters find themselves at a loss for what to do. Start in an inn? It's a valid option, but Moe has a better idea: start with a bang!

HONOR AND DEATH by +Sean Bircher, from the blog Wine and Savages: Sean is one of the creative powerhouses of the role-playing game blogging scene and this short adventure he did for the Week of Vengeance project just his talent and creativity. Check this one out if you're looking for an adventure to throw at your players!

Why 5E is the Last Edition of D&D by +David Dolph, from the blog Big Ball of No Fun: Since the launch of Fifth Edition there have been various claims that this would be the last edition that run from semi-official statements from the Wizards of the Coast Design Team to wilder pronouncements in the fringes of the internet. Many of these have been dismissed immediately by the wider community of D&D enthusiasts, but David has a theory about why these pronouncements may very well be true.

5 Narrative Details About Caves that will Give your Games some Grit by +Doug Anderson, from the blog Blue Boxer Rebellion: Not being a natural cave explorer myself, as is the case with many of my readers, I found this short guide by Doug to be really valuable. Well worth reading for anyone looking to throw their players into the caverns of their favorite imaginary setting.

LL / 5e Mashup, Part I: Skills; Part II: The Rogue Class; and Part III: The Warrior Class by +Gavin Norman, from the blog The City of Iron: These mashups of various parts of Fifth Edition Dungeons & Dragons and Labyrinth Lord are really interesting. I kind of love mashups on the whole so this is really in a sweet spot for me.

Elemental, I choose you! by +Daniel Davis, from the blog Detect Magic: Daniel has this fantastic idea about treating elementals like Pokemon. I really dig the idea because it kind of makes the enemies you encounter unpredictable in a way that could really become one hell of a fun challenge.

My Rule Zero by +Jens D., from the blog The Disoriented Ranger: Everyone has a rule in their role-laying games that is central to how they play. For some this rule is, "The Dungeon Master is always right," and that's fine but not everyone holds that as a central tenet of their Game Mastering. Jens certainly doesn't, do you?

Disorder vs. Disaster  by +Peter V. Dell'Orto, from the blog Dungeon Fantastic: When you think about games like Dungeons and Dragons is the world you're playing in suffering from disorder or from some post-apocalyptic disaster? Peter contends that most of us D&D players are exploring worlds suffering from disorder. What do you think?

A Tale of Carnage and Revenge by +Jens D., from the blog The Disoriented Ranger: A short, enjoyable bit of fiction that makes me way too happy. I really dug the way he wrote this one.

Jackalware by Blanca Martinez and Joe Sparrow, from the blog Dungeons and Drawings: If this evocative drawing by Blanca and Joe doesn't get you interested in throwing a Jackalware at your players than I honestly don't know what's wrong with. Also, these guys are amazing and you should totally peruse their archives for some kick-ass illustrations of over 300 monsters.

The Ax Grinders Goal by +Mark Van Vlack, from the blog Dust_Pan_Games: An alternative way to reward revenge plots that goes beyond just a satisfying chop to the neck and an end to an imaginary life. Like so many of Mark's efforts on game design he has a way of taking you beyond the complicated mechanics and making the whole thing into something not only enjoyable to read but that feels easy to implement into your own games.

Cultist by +Mike Bridges, from the blog Greyhawkery: This funny one off comic from Mike is a great introduction to not only his sense of humor but to the sort of things he does with his fantastic Greyhawk comic. If you've not checked him out before now is a great time to do so!

Clerics of Blackmoor by DHBoggs, from the blog Hidden in Shadows: The Cleric class originated in the Blackmoor supplement yet we have scant little in way of information about the clerics of Blackmoor. DHBoggs attempts to rectify that in this rather enjoyable post.

I ran Torchbearer by +Natalie Bennett, from the blog How to Start a Revolution in 21 Days or Less: Torchbearer is one of those games that I have an unreasonable fascination with in spite of never having actually gotten a copy of the game; so reading Natalie's experiences with it is right up my alley.

R.E.V.E.N.G.E. by +Alasdair Cunningham, from the blog Iron Rations: There is something so exciting about an organization dedicated to fighting back against the heroes of your campaign; someone your villains can call on when everything goes against them. I love the idea and in Alasdair's capable hands they become the stuff of nightmares for your players.

The Future of GURPS? by Jeff Lees, from the blog Jeff's Hobby Blog: There are hints that a new edition of GURPS may be in the offing and it brings a lot of questions with it. Jeff has some thoughts on where GURPS has been and where it should go in the future.

Arts & Crafts: Morbidly Encumbered edition by Rose and +Logan Knight, from the blog Last Gasp: Open this article and be jealous. It's okay, really. These cats who play with Logan and Rose just happen to get all the cool shit you wish your Game Master would do for you. So you might as well know what it is that you want when you pick out your next Game Master.

I think level drain is stupid by +Patrick Henry Downs, from the blog Nerdwerds: There is a legitimate argument that has been going on for some time now in our hobby that revolves around the use of level draining. Patrick puts forth a powerful argument against level drain.

Revenge, and Why Your NPCs Want It by +Travis Milam, from the blog The Rambling Roleplayer: Sometimes the idea that your NPCs might have something at stake in the games - well, beyond giving the player characters things like quest and loot. Travis, however, reminds us that they should bee more than just a blank face and numbers on a page. They should have motivations too.

Why I love Castles & Crusades by +Otto Q, from the blog Quarzis Games: Have you ever gotten the chance to play a game that captured your imagination? Otto has, and in this fantastic post about Castles & Crusades he'll have you loving it too. Well worth reading!
at September 02, 2015