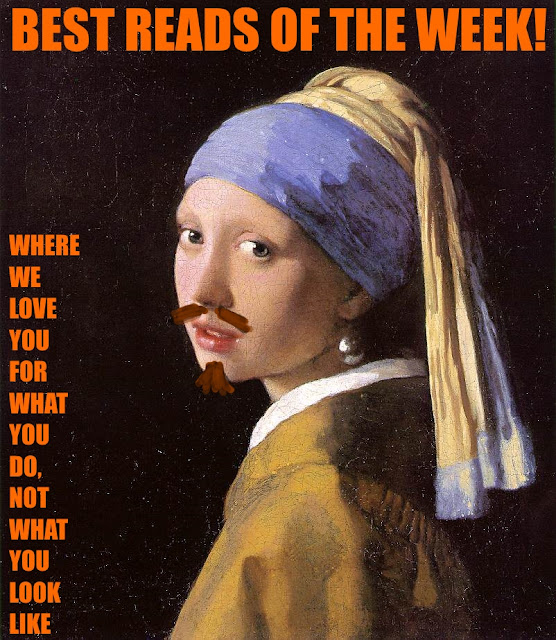 Welcome back to the Best Reads of the Week! Every week I read through more than 450 blogs looking for the best rpg related articles and bringing them directly to you so that you don't miss any of the best stuff. This week we've got: a fantastic little story from +Stelios V. Perdios; thoughts about running games at conventions; some excellent Dwarf variants; an amazing npc Orc that's just dying to make an appearance in your home games; fantastic advice for writing adventures from one of the OSR's best; thoughts on the best asset at the game table - the power gamer; and so much more!

Restarting my AD&D campaign - doing it differently by +Michael S, from the blog ChicagoWiz's Games: Sometimes one of the hardest things to do is to look honestly at your own campaign and to realize not only where it went wrong but why. In this insightful post from Michael he breaks down his campaign in a way that I've rarely seen done. His honest and direct appraisal is a refreshing look into what can go wrong, how to confront it, and where to go from there.

Doing It Wrong When It’s Right There In the Book pt 2: Magic in B/X by Cirsova, from the blog Cirsova: I won't lie to you, this Doing It Wrong series that Cirsova is putting out is quickly becoming my favorite from the entire blog. It's amazing how many things that we take for granted because we've always done them a certain way - especially when we've been doing them wrong. Can't wait to see what Cirsova discovers next!

LL / 5e Mashup Part IV: Bard Songs by +Gavin Norman, from the blog The City of Iron: Gavin continues his attempts to combine parts of Fifth Edition Dungeons & Dragons with Labyrinth Lord. Really neat stuff and I think this one is the best of the quartet.

The Lost Shrine of the Trickster God: GMing at Conventions by The Chatty DM, from the blog Critical Hits: While the Chatty DM is specifically talking about running at a convention his advice would work well for any situation where you're playing with new players. Well worth reading and bookmarking for future inspiration when you're getting ready to start a new group.

Alternate Turn Undead Mechanics by Delta, from the blog Delta's D&D Hotspot: In this really well done post Delta explores an alternative to the Original D&D version of turn undead. The rework could be used in other versions of the D&D game and it might be worth checking out for those of you who have never been all that happy with how Turn Undead works.

4 popular beliefs Dungeons & Dragons defied in the 70s by DM David, from the blog DM David: While this post is specifically aimed at Dungeons & Dragons it's amazing to me how these beliefs have all been turned on their heads and essentially become a part of popular culture in a way that would never have seemed possible back in the 1970s. Great article by David.

TOLKIENIC DWARFS by +Dungeon Smash, from the blog Dungeon Smashing Empire: If you're looking for some excellent Tolken-esque dwarves to populate your world with, this short list is the perfect place to start. Many of the names presented have their meanings next to them which really lends a sense of depth to them.

1d10 Reasons You Should Have Done Something Else . . . Like Drink. A Lot by +Charles Akins, from the blog Dyvers: Terrible, terrible things are being said here. Most of them funny.

The No-Man's Land Trillogy: Part 1, d100 Whats in that hole in no-man's land; Part 2, d100 No-Mans Land Encounters; and Part 3, d100 Strange encounters in or under no man’s land by +Chris Tamm, from the blog Elfmaids & Octopi: Of the long string of d100 tables Chris has made in the last four years this trio may be my favorite. Not only are they easily manipulated into any deadly area you create in your home campaign but if you use all three it actually creates this wild mini-setting, complete with its own story hooks. A brilliant series.

Princess Determination Table 1: Leigh Brackett's Solar System by +John Till, from the blog Fate of Tekumel: While this table is setting specific I dig the hell out of it. There's something about it that just makes the pulpy, space-opera loving heart beat just a little bit harder.

Game Night Extrordinarie and a Game Prop of Epicness by +Tim Shorts, from the blog Gothridge Manor: I am rarely given to open jealousy but on this occasion I am laid bare. I am completely and totally jealous that Tim was lucky enough to explore this home made dungeon. Check it out to see lots of pictures and be just as jealous as me.

The Sad Story of Tik Tok the Half Human by +Jez Gordon, from the blog Giblet Blizzard: If this short piece by Jez doesn't provide you with a NPC for your games than you haven't read it. Love this character and I can't wait to have Tik Tok show up in one of my own campaigns.

What Happens When Cthulhu Is Released by +Arnold K., from the blog Goblin Punch: What would happen if a creature like Cthulhu was released from his slumbers? Arnold has a good idea and I like it a lot.

Adventure Writing Advice  by +Tim Shorts, from the blog Gothridge Manor: Tim's been writing a lot of adventures and he's got some pretty solid advice on how to go about making something that you can be proud to have made. Worth checking out for anyone who writes their own adventures.

Why no Nations in Gamma World? by +Joseph Bloch, from the blog Greyhawk Grognard: I'll confess that I have a soft spot for Gamma World, but that doesn't stop me from wondering about some of its eccentricities. It doesn't stop Joseph either and that's why he's asking where are the nations? Why haven't the peoples of Gamma World once again formed nations? What do you think?

Jean Veber by Aeron, from the blog Monster Brains: Someone needs to go through these retrospective of Jean Veber's work and stat up these monsters. Practically every picture in this post has my brain off to the races and plotting adventures to encounter these creatures - and even if I had never heard of role-playing games I would be writing stories about them. Jean Veber is right in my wheelhouse and I am now a huge fan.

On Principled Profit, The Con Man and the Fraud by +Courtney Campbell, from the blog Hack & Slash: If you haven't heard of Ken Whitman then consider yourself lucky because this charlatan has been bilking consumers and industry professionals for nearly twenty years. Before you invest in any of Ken's future Kickstarters be sure to read this first.

D&D 5e: Magic Item Economy by +Brandes Stoddard, from the blog Harbinger of Doom: Brandes discusses magic items and the economy built around them in a setting like Eberron here. His thoughts on the subject can easily be extrapolated to any setting where magic items are more common.

Why PDFs of Fifth Edition D&D still matter by +Robert Jazo, from the blog A Hero Twice A Month: We're over a year since 5th Edition dropped into our laps and still there are no official 5e PDFs. Does it even matter? Robert thinks so.

Suggested Readings for Running Fantasy Cities by +Chris Kutalik, from the blog Hill Cantons: If you're thinking about running a fantasy city this post is a great place to start as Chris has already created an index of books, blogs, and articles that you should check out for your research. Well worth bookmarking and revisiting time and time again.

Why your Power Gamer is your most valuable player . . . sometimes by +Murky Master , from the blog Murky Murky: Without out a doubt the Power Gamer is often the most maligned player at the table. They min / max every skill, ability, and power until their characters are often walking gods that dominate the game. Such a player is trouble in almost every way. So why then is Murky saying they're your most valuable player?

Differences Between 1st and 2nd Edition AD&D by Mike Summers, from the blog Old Guy Gaming: When it comes to discussing the differences between the two editions there's often this hand-waving that goes on because many of those changes aren't really that substantial. But what actually changed and how did it affect the game? Mike has your answers.

Why  I  Love  Dungeon  Crawl  Classics  RPG  (and  Why  You  Should  Play  it) by +Stelios V. Perdios, from the blog The Word of Stelios: Dungeon Crawl Classics is one of those games that I've always been interested in but have never been willing to pay the money to get a copy of because I was on the fence about whether it was worth the cost or not. After reading Stelios' post I can say that I'm picking up a copy today.
at September 03, 2015