The Book Shelf: A Canticle for Leibowitz by Walter M. Miller, Jr. 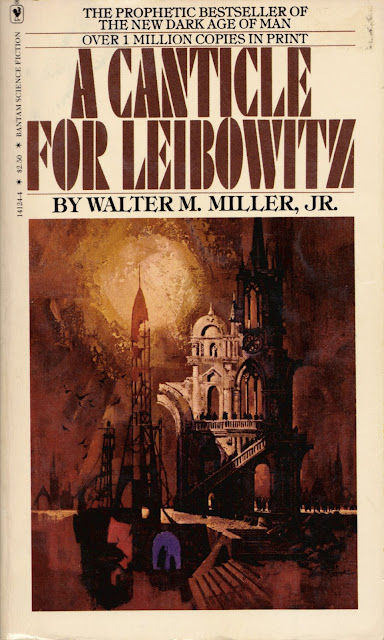 Without question A Canticle for Leibowitz

by Walter M. Miller, Jr. is one of the best novels I've read in my life. Miller has an amazing writing style that allows him to be absurdly funny one moment and then tragically prophetic the next without the typical sanctimonious preaching that can accomplish such things.

The novel follows the story of a single church through periods within the lives of three monks, of vastly different time periods, that illustrate the steady progress of man after having survived the self-inflicted nuclear annihilation of the planet. Each monk's life dominates a single section of the book with each life's story exploring a different aspect of humanity's climb back from the abyss while at the same time examining the importance of religion within an individual's life and it's importance in our collective survival.

Now when I picked up A Canticle for Leibowitz it was without ever having heard of it before. I had no idea that I was getting ready to read one of the classics of Science Fiction or post-apocalyptic fiction - and if I had I would have been far less likely to pick it up. So often when you see a book that is presented as universally praised it tends to be terrible. The writing is either overly stylized, nebulous to the point of pointlessness, or overly complicated for no other reason than to complicated. Books like that have an audience and it is small for a reason: because the vast majority of people who tell you about them haven't actually read them. These books take on a life of their own were people talk about how great they are without ever having read them because that's what everyone else thinks. That isn't the case in A Canticle for Leibowitz. Miller's novel is perfect in every way. The writing is brilliant; the characters are pitch perfect, and I cannot recommend it enough. Do yourself a favor and pick up this classic work today.