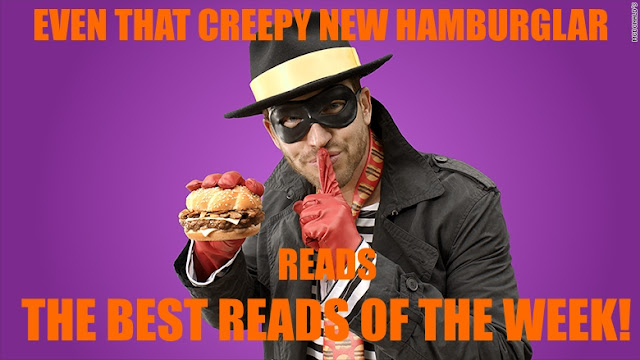 Welcome back to the Best Reads of the Week! Every week I read through more than 370 blogs looking for the best role-playing game related articles to bring them directly to you. This week we've got inspiring artwork for your games; thoughts on the history of Deities and Demigods; a new take on a classic monster; a visualization of one of the iconic structures in role-playing game history; and so much more! If you see a post that you like be sure and tell the author how much you enjoyed it! And if you've got any questions about this month's lists be sure and check out the FAQ.

Thank you in advance for all of your comments, shares, plus 1s, and for taking the time to read this list. See you on the next set!

Tales of Fantasy by Larry Todd (Troubador Press, 1975) (Part Two) by 2W2N, from the blog 2 Warps to Neptune: If you're looking for some visual inspiration for your role-playing game of choice than you couldn't go wrong with the beautiful art of Larry Todd. This fantastic selection from 2 Warps to Neptune is a great place to be introduced to Todd and to start your imaginations running.

A Hungry Empire by +Luke Gearing, from the blog ANT-LERRR: In this short post Gearing uses an economy of words to create an evocative setting that could see me adventuring on it for years to come. Really good stuff there. Plus a cool little d8 table for your gaming needs.

A Question of Gall by +Christopher Wood, from the blog Carapace King: Inspired by a condition called "gall," where a parasitic wasp injects an irritant into a plant, Christopher has created a few monstrous creatures that I can't wait to unleash on my own players!

James Ward on Deities & Demigods by Delta, from the blog Delta's D&D Hotspot: The earliest copies of TSR's Deities and Demigods Cyclopedia included both Lovecraft's Cthulhu and Moorcock's Elric mythos. In later versions they were removed from the books and for years this has been a point of debate. This post by Delta brings in the primary author for the book, James Ward, and his recollections on the affair, as well as, Sean K. Reynolds investigations into the matter.

Combat is Visceral, Make Them Feel It by +Mark Van Vlack, from the blog Dust_Pan_Games: One of the things that we never seem to do enough in our games is make the combat feel like it is actually dangerous. Thankfully Mark is here to show you one way of doing just that.

Deals with Devils by Trey, from the blog From the Sorcerer's Skull: Devils are a lot of work. Their motivations are more nuanced than Demons in most role-playing games. Yet that can become tiresome when you run into it time and time again. At times like those you need a fresh take on them and this one from Trey is like a breath of fresh air. Be sure and check them out as they can easily be adapted to most any campaign.

On Randomness In Character Generation, and Why Old School D&D Is Awesome For New Players by Natalie, from the blog How to Start a Revolution in 21 Days or Less: Of the many virtues of older role-playing games one that is rarely focused on is how easy it is to bring new players into the game. Not so with Natalie who makes a compelling case for why teaching new players how to play the game should begin with an older edition.

It Begins with Murder by +Charles Akins, from the blog Dyvers: A short fiction piece designed to set up a rather bloody game's start.

Visualizing Castle Greyhawk by +Zach H, from the blog Zenopus Archives: Have you ever wondered what Castle Greyhawk looked like to Gary Gygax? Then this look into the iconic setting of so many of his early adventures is the perfect place to explore.
at May 14, 2015