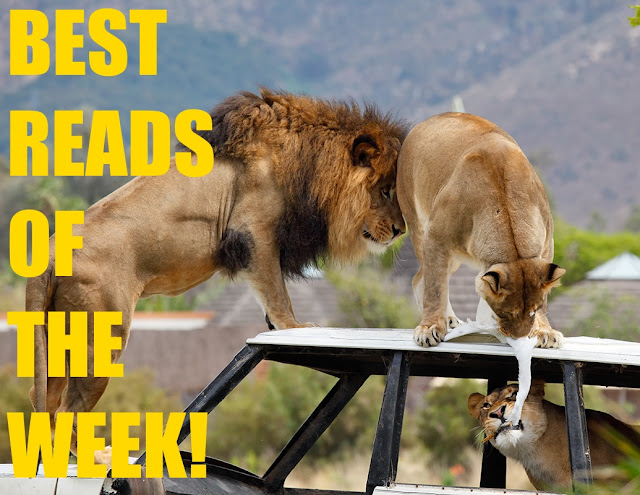 Welcome back to the Best Reads of the Week! Every week I read through more than 450 blogs looking for the best rpg related articles and bringing them directly to you. This week we've got: tables, tables, and TABLES; a new class option for ACKS; advice for budding miniature collectors; a fantastic theory for DARK SUN; one of the best things I've ever read +Zak Smith write; more love letters to our favorite games; and so much more!

ACKS Class: Bearsarker by John, from the blog The Wandering Gamist: One of the things that I enjoy about this class variant John has come up with for Adventurer, Conqueror, King System is that it feels so much deeper than classes in role-playing games generally come across. It's cleverly done and for those of you who love ACKS it's well worth checking out.

How I Run City Adventures by +Jack Shear, from the blog Tales of the Grotesque and Dungeonesque: When it comes to running city adventures there seems to be an overabundance of people trying to sell you dense books that either obfuscate matters or line the pockets of the people writing them while doing nothing that they set out to do. Not so with Jack as he manages to provide a quick, and understandable, guide to running city adventures that doesn't read like a self-important manifesto from a third rate hack who can barely keep her dislike of her audience from showing.

Six Words 6d6: The Road North by +Luka Rejec, from the blog Cauldrons & Clerics: A series of six d6 tables that reads like a psychedelic poem of adventure in long forgotten lands where the gods of old still roam the world and magic has yet to disappear. Just one of many reasons why when Luka updates his blog I make sure to read what's been written.

For the love of the D&D Rules Cyclopedia by +Jens D., from the blog The Disoriented Ranger: Have you ever played D&D with the Rules Cyclopedia? If you haven't then you have been missing out on one heck of a fun time! Take a moment to come along with Jens as he tells you about the game that made him fall in love with role-playing and that has kept him going ever since!

Building a miniature collection on a budget from the most useful figures by DM David, from the blog DM David: If you're thinking about putting together a miniature collection for use in your D&D styled games then this handy guide by David is a great place to start. In it he shows you which figures will give you the most bang for your buck. Thanks David! This one was super useful!

How low, is low prep. Thoughts on the improvised game by +Mark Van Vlack, from the blog Dust_Pan_Games: If you're having troubles improvising your games and yet you don't want to put in the time to detail every person on the map than this post from Mark will be right up your alley. Mark is able to deftly identify the parts of prep you need to do and then to give a few guides to help you during play. Really worth reading for anyone looking to being running with less prep and for those hoping to improve their low preparation games.

My Grand Theory of Dark Sun by +Jürgen Hubert, from the blog A German Geek: Dark Sun is one of those campaigns that never receives enough love as far as I'm concerned, and part of the reason for that is that it presents a lot of troubles for people attempting to 'get' it. The story is convoluted, twisted, and filled with little contradictions. So when Jurgen posted this it was right in my wheel house. Connecting the dots, drawing conclusions, and just a hint of conspiracy. All good stuff.

Turkish, Mofo–Do You Speak It? by Andy Slack, from the blog Halfway Station: This is a post about languages both in the real world and those inspired by them in a far off future. Fascinating stuff.

Max Frey by Aeron, from the blog Monster Brains: Are you looking for a new dragon? This retrospective of Max Frey's work is filled to the brim with terrifying dragon-like creatures that should haunt your players for years to come. Check it out!

2,000,000 Page views! And Ennies. by +Timothy Brannan, from the blog The Other Side: Congratulations to Timothy! This is a heck of a milestone for anyone and Timothy is as nice a guy as you're likely to run across! Go wish him congratulations on this amazing achievement!

Why I Love Fifth Edition Dungeons and Dragons by +Travis Milam, from the blog The Rambling Roleplayer: I just really dig the hell out of this post. Travis has a way with words that I really dig and his thoughts on 5e kind of solidified my own feelings about this latest edition of D&D. Well done Travis!

Not Loving Friend Computer is Treason - A Paranoia Love Story by +Marty Walser, from the blog Raging Owlbear: The computer has told me that I love Paranoia and I believe it. (HELP ME!) Marty is clearly a prophet of the divine will of the computer. All is okay. (HELP ME!) Please go back to playing your video games and writing about table-top rpgs.

Why Arcana Evolved is Awesome by Sanrock, from the blog Sanrock Reviews: I must admit that I missed the boat when Arcana Evloved came out. I even found it a few years later in a used bookstore for $6.00 but I passed! Why? I was young and incredibly stupid. And it only becomes clearer when you read this article by Sanrock that shows just why Arcana Evolved is one of the best things you could ever buy.
at August 30, 2015