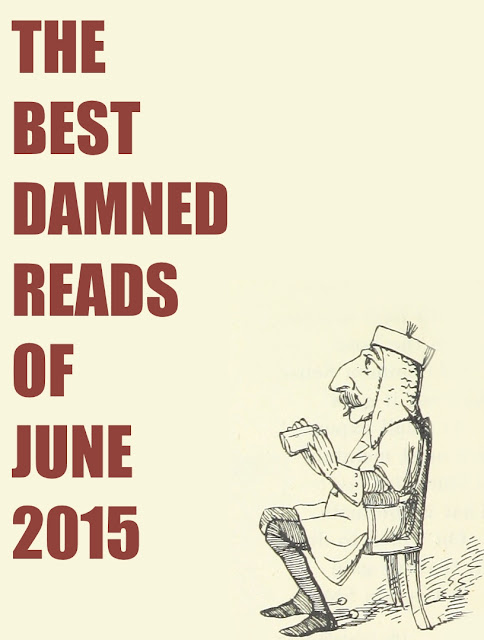 The other day I was reading a blog when I ran across a comment that I'd like to paraphrase here. The comment's author was distressed and wrote, "My favorite blogs have stopped updating! Grognardia, gone. ChicagoWiz's RPG Blog, gone. Everyone is shutting down their blogs, deleting their content, and moving to Google Plus and Tumbler. Blogging about role-playing games is a dying format, like list-servers before. And besides, those who are still blogging aren't saying anything worth reading anymore!"

I think it's reasonable to argue that I read more blogs than most and I can tell you that there is still great content being produced week after week, day after day. Just look at June, a month that traditionally sees a slow down in production throughout the blog-o-sphere as people start take vacations and going to conventions. Still we saw nearly 2,700 posts being produced this month across over 450 blogs, with nearly as many individual authors, and had more Best Reads recommended than May even though it had nearly 300 less posts produced.

This isn't an aberration or a fluke.

The blog-o-sphere is alive and well as new authors bring fresh perspective to the games that have captured their imaginations while older authors keep putting out good stuff with the knowledge that experience brings along. Our hobby, role-playing games, is experiencing a renascence in wider gaming culture and with that comes new players who bring along with them an whole new understanding of what makes the game fun and where they're willing to push the boundaries. They won't be the second comings of Grognardia - and who would want them to be? We've already read those posts, seen those ideas, and seen a million blogs attempting to be +James Maliszewski. Instead every month new voices step forward to push the conversations about our hobby in new directions; and that's a good thing.

Finding those voices and bringing them to the forefront is what the BEST READS OF THE WEEK! series is all about. I want you to be able to see where our hobby is going by bringing to your attention the authors who are doing interesting projects; who are shaping the discussion of our hobby; and who are putting out stuff that will make your games more fun. Here, then, are 10 of the the best from June.

Cosplay Is Not Consent by +Christopher Helton, from the blog Dorkland!: From time to time there comes along some ignorant jackass who thinks that putting his hands on another human being without their consent is acceptable because they decided to wear something that doesn't cover them from head to toe. Such people are terrible human beings and we should all listen to what Christopher has to say on the matter - especially if you disagree.

Playing it Forward by +Kevin Smith, from the blog Melvin Smif's Geekery: If you're like me there are times when you find yourself concerned with the future of the hobby. Will your children still be playing it? Will theirs? Often there's a sense of helplessness in these thoughts as it can feel like you're such a small part of the world - which is why Kevin's post is so important. Unlike so many of us he's going out and paying it forward by bringing the games he loves to the next generation of players. If you're interested in bringing the next generation of gamers along then you need to read this excellent post and consider doing something similar.

Rogue Rant: Suck It! by Timrod, from the blog Cave of the Dice Chucker: One of the arguments that you'll see popping up every so often is that Dungeons & Dragons has lost its way. Where? Now that's a debatable point because for every Dungeon Master that you meet there's a different answer depending on what edition they like playing the most. Timrod, however, thinks that there was a definite point where it went wrong and he's here to tell you all about it.

Skraelings by Scott, from the blog CYCLOPEANA: It seems like most of the time when we write up a monster's description that it follows the traditional Dungeons & Dragons format. The text may have some flavor to it, but more often than not, it just feels tacked on and superfluous. Scott, however, has chosen to go a different route by emulating the style RuneQuest used, and in so doing he has shown us all how terrible what we've become used to really is.

Doing Combat Wrong When It Was Right There in the Book by Cirsova, from the blog Cirsova: If you're like me when you actually sit down to the table and start reading the rule books you invariably find something that you've been doing completely different from how the game intended it to run. In this fanatastic post from Cirsova we're treated to a glimpse at how combat has been run wrong for years in Cirsova's home campaign. Have you been making the same errors?

I know I have.

The City-State of Wunderspire Series: Part 1, An Overview of the City-State; Part 2, The Elite, Marvels, the Arcane; Part 3, A Sphinx Without a Secret; Part 4, Heights, Multitudes, Gods, Intrigue; and Part 5, The Underclass, Other Lands, and the Complete PDF by +Jack Shear from the blog Tales of the Grotesque and Dungeonesque: In this excellent five part series that serves as a companion piece to last month's Arksylvania series presents you with a city-state to explore and plunder until your heart's desires are satiated. Like so much of Jack's setting work the Wunderspire series provides just enough information to serve as a launching point for your own imagination without overwhelming you with needless lore. Plus, he's made a free PDF to go with it. Well worth checking out!

Gobbos by Rose and +Logan Knight, from the blog Last Gasp: Think about the goblins you've been killing all these years. What do you imagine? A sniveling, cowardly cur? Now imagine a goblin that
gets off on the violence you do to them. These Gobbos that Rose and Logan have created are the answer to the boring goblins that you've used for year and bringing them into your home campaigns will create a whole new world of violence. I dig the hell out of these guys and the concept they've come up with here.

Let's Talk About Campaign Settings I: Introduction; Part 2: Second Edition Settings Analysis; Part 3: OSR Settings and Part IV: What Can We Learn For Our Own Settings? by +Jeff Russell, from the blog Blessings of the Dice Gods: The settings where we choose to adventure have a lot of baggage associated with them that comes not only from the written works but from what we project onto them. We take an ownership of them that often causes us to treat them as something incredibly special; but why? In this insightful quartet of posts Jeff examines why the Second Edition settings were able to do this better than any before them and how that has informed the OSR since.

Savage Worlds: Murder-lite Edition by +Edward Lockhart, from the blog Violent Media: The Murder-lite Edition of Savage Worlds that Edward has created is the sort of thing that just captures your imagination. It's got a brutal attitude that screams out for your characters to enter into the world as fully formed bastards pressing back against all the terrible things in the world that would silence the good and kind. More than that, though, is the fact that the game he's made knows looks at all the classic complaints (like creating a sense of verisimilitude and character immersion) and pokes them right in the eye. Check it out.

The Box by Multiplexer, from the blog Critical Hits: In the pantheon of brilliant role-playing game bloggers it's hard to argue against Multiplexer's inclusion. With each new post she continues to create content in a way that no other blogger has been able to match or even to emulate. This latest effort, The Box, is arguably one of the best ways to start a campaign and to keep it going to ever greater heights of murderous looting that I have seen in years. If you're not reading her you're missing out.

As always, if you liked any of the posts listed here be sure to let the author know. Leave them a note on their blogs, give them a plus 1, like them on the Facebooks, and share their posts in your social media feeds! Till next time!
at August 28, 2015