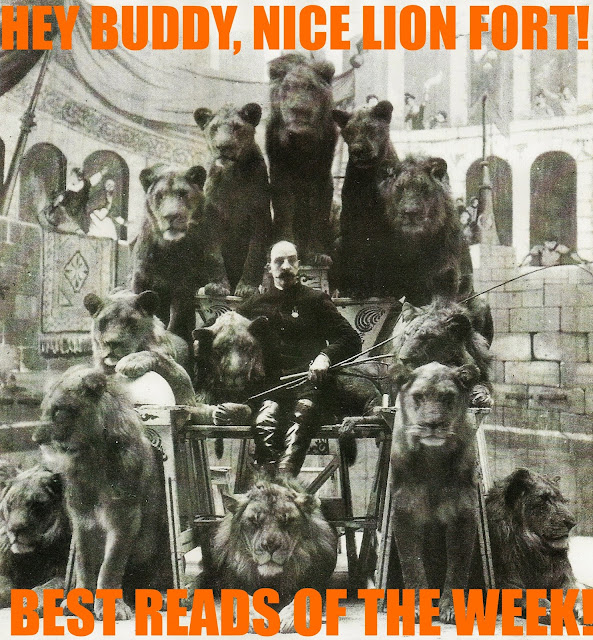 Welcome back to the Best Reads of the Week! Every week I read through more than 450 blogs looking for the best rpg related articles and bringing them directly to you. This week we've got: the beginnings of yet another fantastic setting from +Jack Shear; a breathtaking interview about fire; a controversial new game; dungeon shorthand; a fantastic post from +Mateo Diaz Torres; and so much more!

White Hot Star by JB, from the blog B/X Blackrazor: JB's review of White Star launched a thousand words of digital ink as bloggers both prominent and not-so-much went out of their way to dissect his review with some calling it "sour grapes" while others described it as an "on point" assessment of the new release. Either way this review is a rather good glimpse into the product from someone who wasn't instantly in love with it - and that can be a really good thing for all of us when it comes to not wasting our money and time on games that won't fulfill their promise.

Arksylvania Introduction, Part 2: Blighter's Manse and Dunlowe, and Part 3: Exford Heath, Hawking Moor, Hungry Hollow by +Jack Shear, from the blog Tales of the Grotesque and Dungeonesque: The Arksylvania setting represents Jack turning his talent towards a setting that combines the best elements of Castlevania, Bloodborne, Penny Dreadful, and Darkest Dungeon to create something that is wholly his own. Like his previous efforts in remixing Ravenloft the Arksylvania series is well worth checking out and plundering for all the things you never knew you needed in your home games.

Princes of the Apocalypse Tactics: Black Earth Priest by +Daniel Davis, from the blog Detect Magic: Are you running the Princes of the Apocalypse but finding that the Black Earth Priests are just a little too easy for your players to run over? Then try this incredibly useful tactic Daniel has come up with to increase the difficulty without manipulating the Priests into something else.

Why Wizards Suck on the Battlefield by +Rick Stump, from the blog Don't Split the Party: When 4e first came out there was a lot of talk about Quadratic Wizards and Linear Fighters - as though such a thing had any real meaning - with a general consensus being reached that Wizards were far superior to fighters. Rick has a counterpoint that ends with dead wizards, everywhere.

An Interview with Dungeon Smash about Fire by +Patrick Stuart, from the blog False Machine: This is arguably the best interview I have read all year. It's intense and +Dungeon Smash talks about fire in a way that makes you want to hold your breath. Great, great read.

Drawing villains from PC back stories by +Geek Ken, from the blog Geek Ken: Sometimes you're struggling to come up with a villain that will have an impact for your players. Ken has a great suggestion for how to do just that in a way that will strengthen your players' own personal narratives.

XIII by +Mateo Diaz Torres, from the blog gloomtrain: While having these sort of random events in a campaign is not for everyone I love the 13 Warlocks and think the last one in particular, Maastricht, is particularly inspired. Check this one out because Mateo knocked it out of the park.

Settings or Rules or Both and Why Not, Another Giveaway by +Tim Shorts, from the blog Gothridge Manor: Inspired by a discussion between +Erik Tenkar and +Michael S this insightful post tends to do as so many of Tim's posts - it cuts right to the heart of the matter in a reasonable fashion. What's more, Tim's post sparks a lively discussion in the comments of this blog that brings out some rather interesting thoughts from his readers. Where do you stand?

Braunstein! Or Do Ethics Matter in OSR Publishing? by Harvard, from the blog Harvard's Blackmoor Blog: A company took the Braustein name - something it did not own - and used it to make an OSR game with the implication that the original Braustein creator, David Wesely, was, if not involved, agreeable to the game. This was not the case.

Geekway to the West 2015 by +Kevin Smith, from the blog Melvin Smif's Geekery: Geekway to the West is a convention that I've never heard of before Kevin mentioned it on his blog, but after reading this post it's one I definitely plan on attending. In every way it appears to be well worth the money to attend as you not only get a free board game (like the expensive one and not any of that Monopoly crap) but you have the opportunity to win more throughout the convention. Check this post out if you've never heard of Geekway because there's a lot here!

Dungeon Shorthand: A Quick Reprise, Dungeon Shorthand Addendum, and Dungeon Shorthand Sample by Talysman, from the blog The Nine and Thirty Kingdoms: The idea of a dungeon shorthand just fascinates me and the way that Talysman is able to flesh out the idea in these three posts has me convinced of its viability as a system. What do you think?
at August 19, 2015