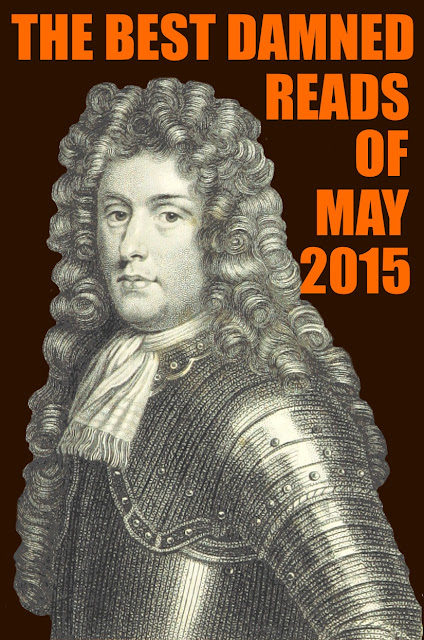 It should come as no surprise to anyone who tries to keep up with their blog lists that staying abreast of everything happening in the RPG blogging scene is no easy task. It seems like every day there's a new blog to check and new posts from old favorites going up with can't miss ideas. Which is why each I've made such an effort to read through the more than 450 active blogs on my current list to find and highlight the best ideas for all of you in my BEST READS OF THE WEEK! series.

This month that means that I've read more than 2,900 posts and checked nearly 500 blogs across Blogger, Wordpress, and Tumblr. In doing so there were some posts that stood out as their authors managed to create memorable articles that not only helped inspire their readers to more fruitful gaming but have helped solve some lingering problems that have troubled them in the process. So get ready because whether you’re looking for a new way to handle social interactions, new places to explore, or wondering why indie games haven’t taken over the world, we’ve got something here for you!

As always, if you liked any of the posts listed here be sure to let the author know. Leave them a note on their blogs, give them a plus 1, like them on the Facebooks, and share their posts in your social media feeds! Till next time!

You don’t have time to build up to something great by 1d30, from the blog 1d30: Often it seems like when you read someone exploring their favorite role-playing game that they have binders and binders of pointless information detailing every nuance of their worlds. They've spent years building these worlds and you should too - or so they seem to be saying. But is that reasonable? 1d30 doesn't seem to think so and I'm inclined to agree because when you lock yourself into trying to be perfect you end up never doing anything.

Does Rule Zero Empower Game Masters To Handle Problem Players? by +Jeffro Johnson, from the blog Jeffro's Space Gaming Blog: For certain segments of our hobby Rule Zero, that the Game Master is always right, is a sore spot that has never gone away. For these individuals Rule Zero is the excuse to act with fiat and to abuse individual players by indulging their whims and prejudices. Are they right about this? Jeffro has some interesting thoughts on this matter that are worth checking out.

Dungeon Shorthand: A Quick Reprise; Dungeon Shorthand Addendum; and Dungeon Shorthand Sample by Talysman, from the blog The Nine and Thirty Kingdoms: Talysman possesses one of those rare intellects in the rpg blogging scene that not only is capable of putting out consistently interesting posts but that can provide you with ideas that have an application beyond pointing to your internet buddies and showing how clever you are. This trio of posts typify Talysman's talent as he demonstrates a clever idea to help players in their exploration of dungeons (and every thing that can be explored can be considered a dungeon). 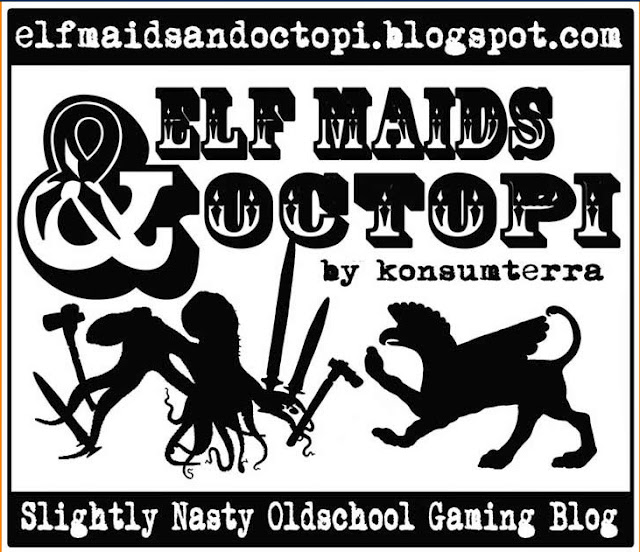 Porc N Orc Talk inspired by Dyvers by +Chris Tamm, from the blog Elfmaids & Octopi: When it comes to discussing the best bloggers in the RPG blogging scene Chris' name doesn't come up often enough. He's a creative powerhouse whose unique worldview has allowed him to take concepts both old and new into directions that few other bloggers could ever hope to follow. In this fantastic piece he explores orcs in his games and pushes them in ways that will change your own. Excellent read.

Why Wizards Suck on the Battlefield by +Rick Stump, from the blog Don't Split the Party: When 4e first came out there was a lot of talk about Quadratic Wizards and Linear Fighters - as though such a thing had any real meaning - with a general consensus being reached that Wizards were far superior to fighters. The debate always felt like a marketing ploy to my mind but some people took it incredibly seriously and actually argued that wizards were vastly over-powered compared to their melee counterparts at higher level play. Rick has an answer to their ideas that ends with thousands of dead wizards at the hands of fighters the world over.

Healers. Curing haemorrhoids, one hot poker at a time by +Alasdair Cunningham, from the blog Iron Rations: I love in game organizations that move beyond the trite magical cabals and instead challenge me to do something exciting with them. The Sisters of Mercy are just such an organization as they travel about the world attempting to provide cures to the sick without the aid of magic. Yet this post wouldn't be half as entertaining were it not for Alasdair's humorous writing. Be sure and check this one out if you haven't already!

An Interview with Dungeon Smash about Fire by +Patrick Stuart, from the blog False Machine: Patrick Stuart often tops my list of excellent bloggers because of his amazing writing but everything he has done pales in comparison to this amazing interview with Dungeon Smash about Fire. The first time I read it I found myself mesmerized by Dungeon Smash's discussion of the fires they had fought and how quickly things could go sideways - even for someone experienced in such things. Rereading it today the experience stands up.

Do yourself a favor and check this one out.

Rules for Grappling Rules by +Douglas Cole, from the blog Gaming Ballistic: Why is it that every time a grappling rule appears in a game that it almost certainly sucks? Douglas has been examining the rules of combat across a variety of systems in his excellent Violent Resolutions series and he has some thoughts about what works and what doesn't. Yet this entry is more than just a look at grappling in role-playing games - it's a look into making the rules we use and how we use them better for all of us. Well worth reading for any aspiring game designers in the audience.

Keep Dungeon Threats Threatening by +Arnold K., from the blog Goblin Punch: The challenge for most of us to take our games from being the simple movements of pieces onto a play mat into an experience that our players will be talking about for day, weeks, and if your really lucky, months to come. Part of creating that sort of experience requires that a Game Master thinks beyond the face of things and considers the meaning of the challenges being laid down and if those meanings are rendered moot by certain elements of the game (such as light, flight, and see invisibility). Arnold explores this topic in a way that only he can in this thought provoking piece.

The Arksylvania Project: Part 1, Introduction; Part 2, Blighter's Manse and Dunlowe; Part 3, Exford Heath, Hawking Moor, Hungry Hollow; Part 4, Karnberg, Locksley, Malheim; and Part 5, Konstantine, Wounded God, Crimson Martyrdom by +Jack Shear, from the blog Tales of the Grotesque and Dungeonesque: What makes the Arksylvania project so exceptional is Jack's economy of words. Unlike so many other bloggers, myself included, he doesn't attempt to drown you in an ocean of text that locks you into the setting as he envisions it. Instead he cleverly provides just enough information to give you an idea of the setting's tone and then just enough to get you started in each section. It's a unique talent that is often eschewed in published works as authors struggle to get their word counts up and unimaginative players complain that the Duke's third wife's sister, that died of the plague 80 years before play began, isn't given a name.