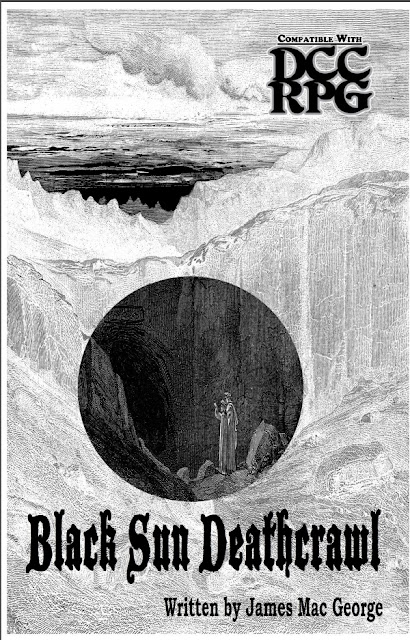 I first heard about +James MacGeorge's Black Sun Deathcrawl after he ran it at Gen Con 2015. The early reports about the game that I found made it sound like a post-apocalyptic adventure that ran far beyond time and hope and placed the players solidly at end of everything. Needless to say this ran right in my wheelhouse and had me incredibly excited about the game. So I contacted James in an effort to secure myself a copy of the game and he kindly provided me with a review copy of the PDF.

The adventure starts with a juxtaposition of Dore's art on one page followed by James' prose on the next to create this steadily building sense of disquiet in the mind of the Game Master and to help establish the tone for the adventure. It's bleak; there's a hopelessness to it that pervades every inch of the module and yet it doesn't have the feel of a misery tour that so often pervades such things. The way that James manages to avoid this is through his ingenious use of the Hope mechanism. This is my favorite part of the deathcrawl as it allows for my players to screw with each other as they attempt to outlast the others and 'win' by being the last left alive - and with my players this turns into a lot of fun.

James has also created some interesting monsters in the Black and Terrible Thoughts. These guys are written like they're an extension of the setting's prose and as a result it makes them far more significant to the adventure than your standard orc or bandits could ever hope to be; but as enjoyable as these monsters are they pale in comparison to the Oblitus Omega, the Last God, whose every encounter is just fantastic (I don't want to spoil anything about the Oblitus but just know that I have stolen this idea for later use too).

Black Sun Deathcrawl is an enjoyable night of gaming, and though it could be expanded into a more protracted campaign, for my players that's all it will ever be. It's fun, exciting, and I will be stealing a lot from it for future games. For the amount of fun had with this game it's well worth the $8 for a print version (which you'll have to pre-order as the original print run has sold out) and definitely worth paying for as a PDF (currently it's Pay-What-You-Want).
at August 24, 2015