The Book Shelf: The Broken Cycle by A. Bertram Chandler 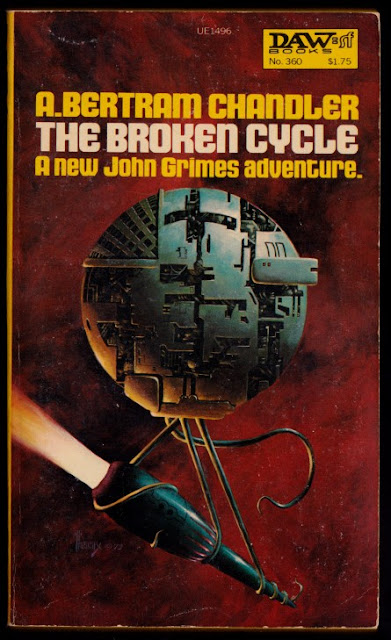 is part of the John Grimes adventure line of novels from A. Bertram Chandler and it's the first of that series that I have ever had the opportunity to read. Chandler has an easy to read style that makes the book feel more like watching your favorite TV show than working your way through some dense volume of immense and importance. As a result it's a lot of fun to read.

At times the story moves at a breathtaking pace with Grimes and Una Freeman, his only companion throughout much of the novel, desperately trying to find their way home after being hurtled through space and time. The aliens they meet along the way are interesting, and while not as terrifying as the plasmoids in Spider Robinson's Telempath, they nonetheless get the job done. On the whole this aspect of the novel has made me glad that I picked up several other John Grimes novels when I was at the used book sale because the character has a lot of potential and Chandler's writing is quite enjoyable.

That isn't to say that the novel doesn't have its issues. The character of Una Freeman is an unsympathetic mess who I often found myself wishing had died along the way. In a lot of ways it seems that she is a caricature of the modern woman (of the late 70s fashion). By turns she is independent and strong, then she turns caustic, then she turns into this sexually liberated individually who gleefully jumps into Grimes' bed even though she doesn't actually care much for him as a person. Without question she was the most difficult part of the story as she often bounced from one personality to the next with little connection to the events surrounding them.

Still, the novel was an enjoyable read and I look forward to reading more from the Grimes series in the future. If you have the chance to pick this one up for a good price then I highly recommend it.